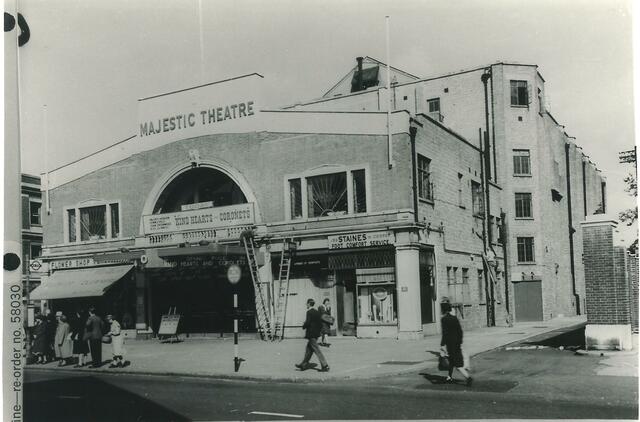 Located in Staines-upon-Thames, Middlesex, to the west of Greater London. The Majestic Theatre was the second in a series of five Majestic Theatres that made up an independent chain of cinemas in the London suburbs and the South East of England.

The Majestic Theatre had an Atmospheric style auditorium set in a Venetian scheme of decoration designed by interior designer W. E. Greenwood (who was also a director in the operating company). The architect of the building was S.B. Pritlove who designed a cinema with a seating capacity of 1,558 and it opened on 11th December 1929.

It was taken over by County Cinemas in 1932 and they in turn were taken over by Oscar Deutsch’s Odeon Theatres in September 1939.

The Majestic was never re-named Odeon and it closed as the Majestic on 27th May 1961. It was demolished and shops and offices were built on the site.