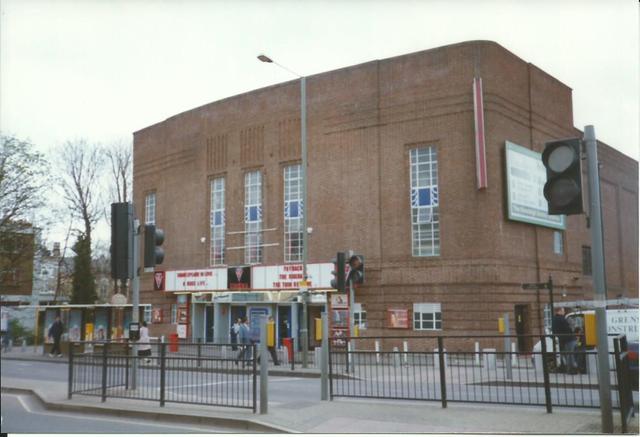 Located in Staines-upon-Thames, Middlesex, to the west of todays' Greater London. Built for and operated by Associated British Cinemas(ABC) the Regal Cinema opened on 20th February 1939 with Janet Gaynor in "Three Loves Has Nancy". Designed by W.R. Glen ABC’s in-house architect, the facade was a plain brick mass, only broken by a central window. Inside the auditorium, seating was provided for 1,103 in the stalls and 510 in the circle.

The Regal Cinema was closed on 30th May 1970, for an expensive twinning and didn’t reopen until 11th March 1971 with Frankie Howard in "Up Pompeii" and Clint Eastwood in "Kelly’s Heroes". Now re-named ABC 1&2 it had seating provided for 694 in the former stalls and 586 in the former circle. The original internal Art Deco style decorations of W.R. Glen had been totally removed.

But the writing was on the wall as a new multiplex was planned in the area, and plans were proposed to demolish the ABC. Taken over by Odeon Theatres Ltd, it finally closed on 14th January 2001 with "Unbreakable", "Meet the Parents" and "The Family Man". The building was demolished in August 2001, and a block od luxury flats named Thames Edge Court were built on the site.

A set of vintage photographs of the Regal/ABC Staines:
View link

Correction. ABC was NOT taken over by ODEON… ABC bought out Odeon and as the Strongest name brand was Odeon they chained the whole chain to Odeon..

I have fond memories of this cinema when I was the Manager throughout the 90s, being transferred just before it closed. I organised its 60th anniversary and name changes from Cannon to MGM and back again to ABC. I re-introduced children’s Saturday Morning Pictures where the stage was used in Screen One for various entertainers before the film. I remember the queues circling the building on a busy night – down to the river at the back and up the other side, where I would be organising the queues and eventually turning away disappointed patrons as we had full houses in all three screens. It had a popular licensed bar and two busy kiosks – one in the main foyer and the other upstairs, all manned by dedicated, enthusiastic staff. The Number One auditorium (the original circle space with a new screen, gold tabs and stage extended forward) was equipped for 70mm and Dalby Digital stereo. To me it was one of the finest cinemas to watch a film.

On the 27 December 1977 STAR WARS was showing I went to see this at this cinema with my parents ,i was just a young child at the time and I use to go to this all the way to my mid 20s when i was living in Staines I ,My mum even worked here from the early 1990s ,her name was Sonhia ,it was the best cinema,sad they destroyed a peace of excellent history rather than renovating it,even Staines looks so different now,wheres my KFC gone and my old school is now a new police station.

BIGGEST CINEMA I HAVE EVER BEEN TO ,EVEN TO THIS DAY .SHAME ITS GONE .