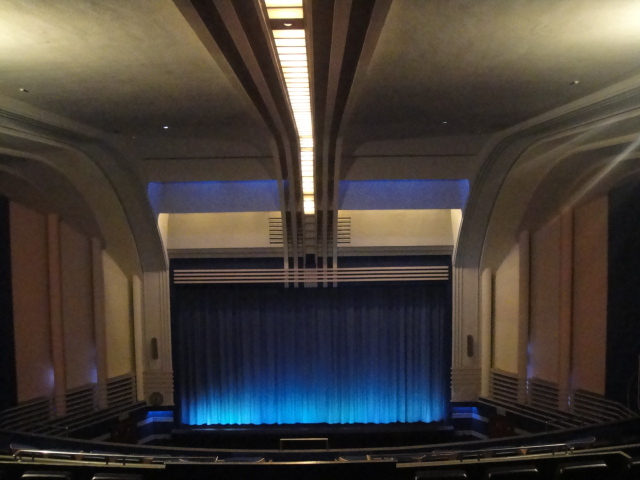 The Odeon Theatre was one of the original cinemas in the Oscar Deutsch owned Odeon Theatres Ltd. chain. It opened on 9th September 1936 with the British comedy film “Educated Evans” starring Max Miller. Seating was originally provided for 1,827, with 1,217 in the stalls and 610 in the circle.

Located on a corner site, the Odeon’s rather small facade is covered with white faience tiles in the central section, with two bays either side that are covered in black faience tiles. On either side are a parade of shops on the ground floor with flats above, which hide the bulk of the auditorium section of the building. There is a small car park at the rear.

Inside the building, the decorative Art Deco styling is considered a prime example of 1930’s cinema styling and even created a style to itself, thanks due in this case to architect George Coles, it became known as the ‘Odeon style’.

Troughs of concealed lighting illuminate the auditorium and ribs of plaster stretched from the projection box at the rear of the circle, down the centre of the ceiling to the proscenium arch, forming a stylised strip of film, which also contains lighting.

The Odeon was tripled from 26th May 1974, creating a 436 seat screen in the former circle which uses the original projection box and proscenium opening, and two screens under the circle in the rear stalls area with seating for 171 and 169. The front stalls area is un-used.

The Odeon Muswell Hill was given Listed Grade II status from 6th March 1984 and has since been raised to a Grade II* Listed building. It remains open and is a popular cinema serving the local community of this North London suburb, despite opposition from nearby multiplexes in Wood Green.

In April 2015 it was announced that the Everyman Cinemas chain were purchasing four Odeon’s: Muswell Hill, Gerrards Cross, Barnet and Esher. It was closed in June 2015 for refurbishment and re-opened 10th July 2015. Seating is now provided for 410 in Screen 1 (former circle), 61 in screen 2 and 68 in screen 3.

In the summer of 2016 plans by architectural firm NBDA Architects were approved to build two ‘pod’ screens at the rear of the circle (despite objections from the Cinema Theatre Association). The front circle seating has been retained and the long disused front stalls brought back into use and as Screen 1 re-opened 16th November 2016. The two ‘pod’ screens in the rear of the circle opened 31st July 2017.

Now open again with a pop up bar!!

The two screens below the circle are now closed for refurbishment.I hope the front stalls area is re-instated as happened at Rex Berkhamstead and St Albans Odyssey.

the stalls area is to be reinstated at this magnificent cinema .Everyman are doing a superb job on making this venue an event cinema

this fully refurbished cinema opens two new screens this Friday in the rear balcony section, bringing the total to five

Pictures added, with the pod screens added in the circle

I see from the photo that Screen 1 has movable side masking.

Are all the screens Scope ?

NBDA Architects – Everyman Cinema. According to this page, the project cost was £3.5m.

The outside and outside of this theatre was seen the documentary “Dalekmania” in the extras section on the DVD' and Blu-ray’s of “Doctor Who and the Daleks” and “Daleks invasion Earth 2150 Ad”.