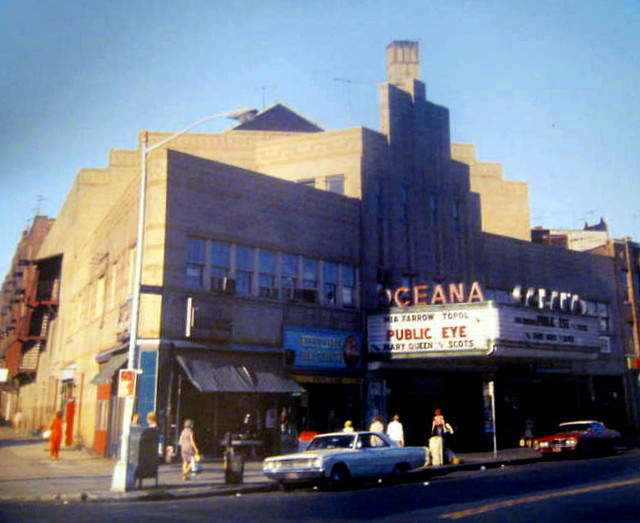 The 2,184-seat Oceana Theatre was opened on January 25, 1934 with Joan Crawford in “Dancing Lady”. It was operated by an independent exhibitor. By 1943 it was operated by Rugoff & Becker. In the 1950’s, it was taken over by the Century Theaters chain.

The Oceana Theatre was later divided into a 4-screen multiplex. What was interesting though is that the owners were so concerned about people going from picture to picture, that they made a “rats maze” in where you had to go through different doors to access each individual auditorium.

The candy counter upstairs and down was divided in half and each theatre even had its own rest rooms! However, this shrunk the lobby into a very small size.

Later, they took the backstage area, and added theatres 5 and 6 to the building. The backstage area used to have vaudeville-era clothes in boxes and other great old items plus the original stage was hidden behind the screens on the 1st floor.

Also, originally in multiplexes, all screens had to share a common projection booth due to union rules. At the Oceana Theatre the booth was in the back of the two downstairs theatres and the upstairs booth was accessed through a ladder which would go to the booth which was in the middle of the theatre upstairs.

They eventually got rid of the booth structure and moved the projection booth to the rear of the upper theatres after union rules were relaxed.

Known later on as the Atlantic Oceana, the theatre operated as a venue for Russian live dinner theatre, known as the Millennium Theatre. This closed in 2014, and in the summer of 2014, it was being converted into a Russian supermarket. It was reopened in 2016 as the 1,326-seat Master Theater. It had closed by 2019.

I think the streamlined architectural lines in the portions of the lobby ceiling depicted are consistent with a theatre built in the 1930’s. The color scheme seems a bit garish, and most likely not original. I’d also think some of the lighting is retro-fitted. The carpeting along the staircase wall appears to be repeated in the auditorium side walls – at least from what I can make out in the very first picture taken of seated patrons that appears in the gallery. Outside of the lobby ceiling, I’m not sure very much (if anything) survives from the original interior design.

Apparently the theater is no more. A 15,000 feet gourmet Russian supermarket is due to open on the site offering 40 varieties of caviar. It’s called Gourmanoff. Foods of Bulgaria, Uzbekistan and Latvia will also be featured.

This has reopened as the Master Theater.

I grew up on Banner Avenue and Brighton 7th Street in the 1950s. The Oceana was our regular neighborhood tgeater (along with the Tuxedo on Ocean Parkway off Brighton Beach Avenue). I remember going to the Oceana in about 1955 (I would have been 9 years old) to see a live stage show with tge Merry Mailman, Ray Heatherton (actress Joey Heatherton’s father). Many good times at the Oceana.

This theater should be listed as the Oceana!! Nobody is going to search for this classic old Brooklyn theater as the Master Theater. It has become a Russian supermarket for the most part and does not deserve to be associated with this Russian “theater”. ALL THE TRUE MEMORIES OF THIS THEATER IS OF OCEANA! This theater should be listed as CLOSED! Give the Master Theater it own listing or make it a side note!

If you search as Oceana you’ll get the Master. In theory all CT sites should be by the last name used. In theory.

Please update this theatre to Oceana Theatre. The theatre inside is a supermarket. Just uploaded photos. The Master Theatre entrance is a staircase inside, don’t know if it the original staircase of the Oceana.

I agree with thehorror13, it should be listed as closed and have a separate entry for the Master. When google, most people will google Oceana. Unfortunately, I never saw a film their. Mostly in the 1980 and 1990 I went to Kings Plaza, Sheepshead Bay and the Kingsway a few times.

The staircase is not the original one. You acsess the restrooms from a wide staircase on the riht hand side of the orchestra seating area, the candy stand was in the, set slightly back from the seating area so you could actually around the counter but concessions wer sold from the front facing incoming audiences. The ladies room would be at the top ofthe left staircase and the mens room was to the left accssesed by a simple staircase in the inner lobby on ththe left, not in the orchestra. Today you can see cove lighting as you enter the supermarket still intact.. this would have been the back of the orchestra between the back ofthe candy stand to the last row of the orchestra, a four foot wooden halh wall backed the seats and you would be able to see the entire auditorium. 1n 1974-1975 when I worked there, Mr. Schiering closed the balcony to save on projectionist’s salaries as they got paidby the number of seats. Two balcony/loge entrances wer plaster-boarded one with a door so the Projectio booth still in the balcony. I left in 1976 when it became apparent that Scheiring would be retiring and was going to sublease to Golden Theatres, the abotionists of the Loew’s Alpine ant then the Oceana. The Oceana was a beautiful theatre as far as I was concerned, but to longtime employe there “Gloria” the candy counter/matron called it “Do you how much money it costs to heat up this big old barn?” She was ahoot anda very nice lady with a good sense of humor on everything and sex. This is only a tid-bit, there is much more. Let me know if you want to hear Part II.

Yesterday after a job interview, I had a slice of pizza at Lenny’s. The original “double-slice” pizzeria from Saturday night fever. In perusing the SNF theatrical artifacts, I came upon an invitation for the December 16,1977 movie premiere and after party at 2001 odyssey (original disco from the film)

I agree that this listing should be changed to closed. It appears to be currently available for rent: https://www.loopnet.com/Listing/1027-1035-Brighton-Beach-Ave-Brooklyn-NY/20301550/