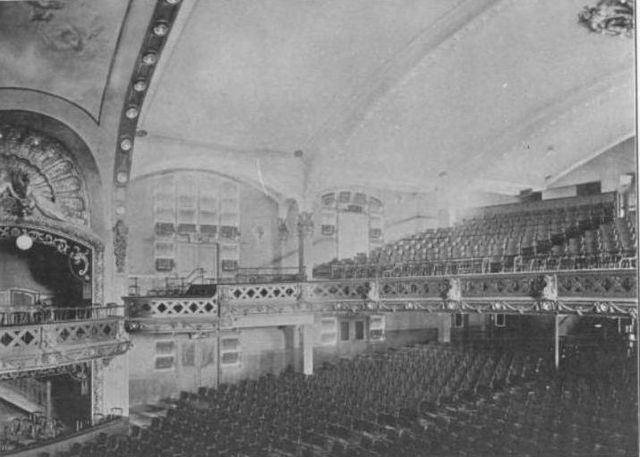 It was renamed Brighton Theatre April 23 1936 and became a legitimate stage theatre. During the summer, Broadway musicals use to be presented on the stage. I saw “Top Banana” there with Phil Silvers in about 1953. The Brighton Theatre closed in 1954, and was sold in June 1954 to be demolished and an apartment house was built on the site.

I remember the Brighton theatre had columns which effected the sightlines from certain seats.

This is a photo of the Brighton Theater circa 1912. It was the second Brighton theater.

Architects' and Builders' Magazine of August, 1910, has an illustrated article about the New Brighton Theatre at Brighton Beach. The theater was designed by the architectural firm of Dodge & Morrison.

The obituary of exhibitor Herman Becker in Boxoffice of September 14, 1957, said that he and Edward Rugoff acquired the Brighton Theatre in 1929. It said that the Brighton had been a theater “…where plays intended for Broadway were tried out….”

In the late 1940s and early 1950s the Brighton was part of George Brandt’s “subway circuit” which took stage plays to theaters in the outlying neighborhoods of New York City during the summer months. One Boxoffice item of the period mentioned that some of the houses in the circuit, including the Brighton, showed movies during the winter.

Thank you for posting the links and information regarding this theatre. The New Brighton Theatre was originally built by David L. Robinson I think in 1909. David L. Robinson died around 1913. My great grandfather John G. Cavanagh (Honest John), an orphan who as a child sold pencils at the racetrack and who later worked at the Brooklyn Eagle, at some point became president of the Robinson Amusement Company. David’s brother George L. Robinson became manager and John Walters became I think treasurer. All three were well known men of the time. John Walters and John Cavanagh were engaged in horse racing, John G. Cavanagh as arbiter of betting, and George Robinson had profitable concessions in Coney Island and Prospect Park. Very famous performers at the theatre; Douglas Fairbanks, Sr., Buster Keaton (still researching the one newspaper reference I found for Buster), Mae West, Eddie Foy and the Seven Little Foys, Eddie Cantor, etc. Cavanagh, Robinson, and Walters owned the theatre until about 1930. I believe they also owned the Brighton Beach Casino but I need to research this further. Interestingly, Dodge & Morrison were the architects of my great grandfather’s residence at Ocean Parkway and Avenue I built around 1907.

The Brighton Theatre was part of the fabled “subway circuit,” legitimate theatres where Broadway shows would go to to try out new shows (read Moss Hart’s account of this in ACT ONE) or after their runs on Broadway had closed. My father managed the theatre until it closed in 1954, and one of my earliest memories was seeing TOP BANANA here as a very young child (and it was Joey Faye, not Phil Silvers, by the time it got to the Brighton, sorry, ERD). There needs to be a proper book about the subway circuit, a very important segment of theatre in the first half of the 20th century.

40’s tax photo cleaned up and posted. The address is different than what is on the header of this page. 3087-91 Ocean Parkway.