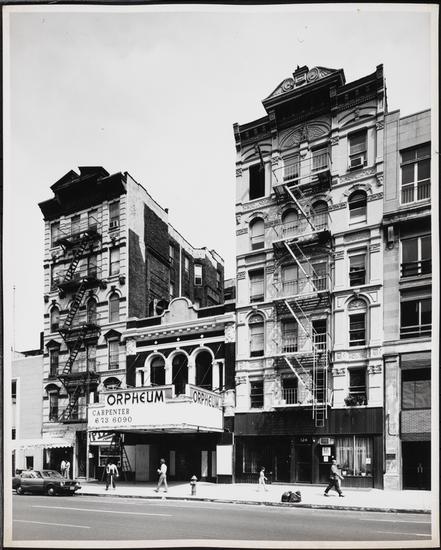 The site on which the Orpheum stands is alleged to have been a concert garden as early as the 1880’s and, as such, to be one of the oldest continuously operating places of gathering for entertainment events in New York City.

A 1904 NY Times article describes a visit to the Orpheum as an evening which began with entertainment from a Hungarian orchestra, continued with dinner in the 7 o'clock hour, and concluded with a three-hour stage show by a Viennese theatre company.

The theatre was part of the exploding Second Avenue Yiddish theatre scene in the early decades of the 20th century but was exhibiting motion pictures by at least 1921. By 1926 it was operated by the Meyer & Schneider circuit. Additional references indicate that it continued to do so through the mid-1950’s.

In 1958, the theatre became a home for legitimate theatre, referred to in some press accounts of the time as the New Orpheum, seating just 299 persons (down from a reported seat count of 560 while a cinema earlier in the decade). Though the Off Broadway venue continued to occasionally show film (hosting, for example, an International Film Festival for Children in 1971 and a weekly Film Makers' Festival in 1980), in the 1980’s and 1990’s it became a venue primarily associated with two productions: the original stage version of “Little Shop of Horrors” (1982-1985) and “Stomp” (1994-present).

Ha. Saps… I only WISH I had a piece of interest in Stomp! Unfortunately, my only financial connection to the show was when I made my own small contribution towards its fortunes, when I took the kiddies to see it about a decade or so ago!

From the photos I have seen, the interior of this Orpheum has been stripped to the brick walls – a long and narrow auditorium.

The Orpheum has had a number of successful live productions over the years. I saw Your Own Thing there which opened on June 13, 1968 and ran for 933 performances.

Then Stomp happened and creativity died. But that’s what happened to New York in a nutshell.

Is Stomp not playing? Are they remodeling the theater?

No, “Stomp” is definitely playing. No stopping “Stomp.”

The 1962 Off Broadway revival of Cole Porter’s Anything Goes opened here on May 15th. This production incorporated some of the changes made to the original version which appeared in the movie. It won the prize for best Off Broadway Revival. The CD features Hal Linden and Eileen Rogers.