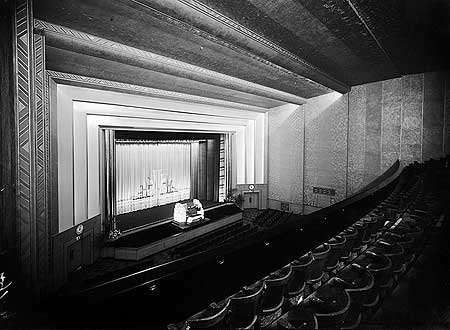 Constructed on part of the site of the former Electric Premier Cinema, the Odeon Theatre was opened on 25th May 1935 with Jack Buchanan in “Brewster’s Millions”. Built as one of the original Odeon Theatres in the then emerging Oscar Deutsch Odeon Theatres circuit, it was built on a prime corner street position in this sea-side town and was the first of several Odeon Theatre’s to be designed by architect T. Cecil Howitt.

The exterior is dominated by a squared tower that has on its top, a flat slab that is supported on a dozen short rounded columns. The entire facade is covered in cream faiance tiles.

Inside the auditorium was rather clean cut with no fancy grille work over the organ chambers. Lighting was concealed in troughs that ran across the ceiling and in three back-lit recesses that surrounded the proscenium opening. Seating was provided for 1,807; 1,174 in the stalls and 633 in the circle.

It was one of only nine of the original Odeon Theatres to be equipped with a theatre organ, in this case it was a Compton 3Manual/6Ranks (with Solo Cello) that had an illuminated console and was opened by organist Alfred Richards.

The Odeon was tripled from 23rd December 1973 in the usual configuration of keeping the main circle area as the main screen and dividing the rear stalls into two smaller screens. A fourth screen was constructed in the former front stalls area which opened in June 1991.

The Compton organ is still played at special concerts and can be heard and viewed from the former circle screen. It remains open as a four screen cinema (one of only a few of the original Odeon circuit theatres still screening films) and serves the town residents and the visitors that come for a holiday at the sea-side. Current seating capacities given in 2008 are; 552, 104, 122 and 275.

The Odeon has been a Grade II Listed building from 21st August 1986.

A 1949 exterior photograph of the Odeon here:
View link

In the current (2006) configuration the circle is now a separate screen and the front stalls with the proscenium opening, original Odeon clock and organ is screen 4. Organ concerts are held about 5 times per year on Sunday afternoons. A photo taken in 2003 is available here: http://www.geograph.org.uk/photo/136127

here are a load of shots taken of this amazing cinema taken last weekend, its in very good condition and looks amazing – lots of other nice deco still remaiining elsewhere in the town including the pier
View link

Another exterior view of the theatre from 1935 can be seen here.

In July 2018 I was asked by Claudia Materna, at ODEON, for permission to use my March 1998 images in a display the company was creating, at the cinema, to celebrate this historic movie palace. I was only too pleased to provide this, and the history wall, a permanent installation, was unveiled in October 2018. (It is in the upper foyer.) In these days of ever more futuristic, state-of-the-art all-digital multiplexes (such as ODEON’s own Luxe brand) it is heartening that the company is so mindful of its proud heritage. (Similar history walls have been installed at the ODEONs at Salisbury, Exeter and Glasgow Quay.)