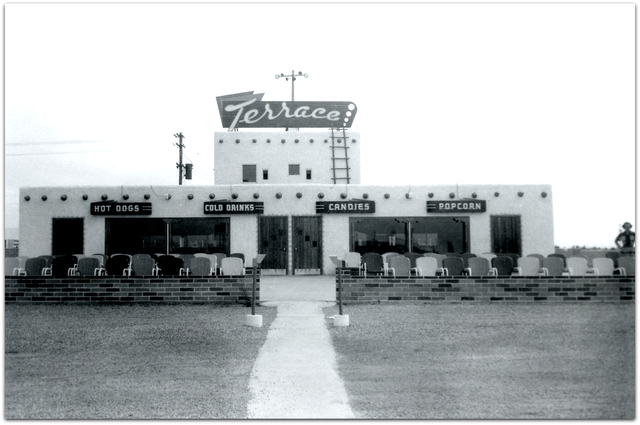 The Terrace Drive-In opened on October 18 1951 with Loretta Young in “Half Angel” & Dan Dailey in “A Ticket to Tomahawk”. It had a capacity for 1,418 cars and 100 seats for walk-in patrons. I have been given a wonderful 1950’s B & W photo of the Terrace’s patio and concession area. It was built in the style of a pueblo. The projection booth is housed in a smaller second story. There are four signs accross the front saying “hot dogs”, “cold drinks”, “candies”, and “popcorn”.

“Terrace” is spelled out in script on a separate sign that is as wide as the projection booth. And as any of us who were lucky enough to have gone to any of the old drive-ins would expect, there are metal lawn chairs out front. In May 1953 a second screen was added.

The drive-in was owned by All-State Theaters in the 1950s, according to this 1955 article:

All-State Theaters, Inc., will open its third theater here Saturday night when the first movie will be shown at the Esquire Theater, 134 Isleta Blvd. SW. The 800-seat theater, formerly the old Isleta theater before remodeling, will present “Seven Brides for Seven Brothers” as its first picture. Manuel Alarid will be manager
of the theater.

George Fossell, representative of All-State Theaters, said the theater, remodelled at a cost of $25,000, has the largest indoor
(36 by 15 ½ foot) Cinemascope screen in New Mexico and has the latest projection and sound equipment. A well – illuminated, fenced parking area can accommodate 300 cars, Mr. Gossell said. All-State Theaters also own the Terrace and Duke City Drive-In theaters here.

Here is a May 1963 ad from the Albuquerque Tribune:
http://tinyurl.com/3kxtab

Above address may be incorrect. According to historical maps, this drive-in was located at about 9450 Central Ave SE, Albuquerque, NM 87123.

There was also another drive-in next to this one (1 screen) but SW @ Ferguson.

I have uploaded an 1967 USGS aerial photograph of this drive-in and the Wyoming Drive-In, which was right next door. Also uploading an 1951 aerial showing it as a single drive-in.

This opened as a single-screen drive-in on October 18th, 1951 and the 2nd screen opened on May 7th, 1953. Both grand opening ads can be found in the photo section.

That must have been some screen mural. A May 10, 2000 editorial in the Albuquerque Journal called it “some of the state’s best neon, … the giant, dancing flamenco couple on East Central’s now-gone Terrace Drive-In.”

An Oct. 28, 1995 Journal editorial reminisced, “For many small children in Albuquerque in the 1950s, one of the city’s most beautiful sights was the 92-foot-high, neon dancing lady at the Terrace Drive-In entrance. There was plenty of time to study her swirling, glowing skirt.”

And a July 19, 1981 Journal story might have been the highest praise of all. “And between 1951 and June 1980, there was a queen of the (neon) tubes, an empress of electricity who presided over this phosphorescent firmament. She stood some 70 feet high, and nearly 50 feet wide when she flapped her arms. She glowed in every basic color. She was the Spanish dancing lady who sashayed her ruffled red-and-blue skirt above generations of Albuquerqueans, the neon symbol of the Terrace Drive-In.”

Boxoffice, Sept. 15, 1951: “Tom Griffing of Griffing-Lasky Construction Co. left (Boston) for Albuquerque, N. M. to supervise the construction of a drive-in theater there. To be called the Terrace, it will be operated by All State Theatres and is expected to be finished by mid-October. … It takes its name from the fact that between 400 and 500 lounge chair seats will be installed on the terrace for patrons who prefer to leave their cars.”

Boxoffice, Dec. 1, 1951: “The Terrace Drive-In opened with what the owners say is the largest screen tower in the country. The projection booth sits back 550 feet.”