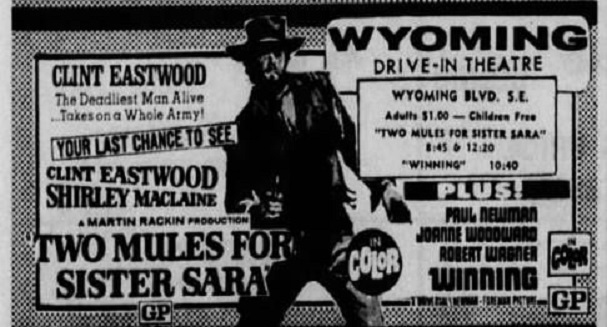 The Wyoming Drive-In was opened January 26, 1962 with Dolores Hart in “Where the Boys Are” & Jack Lemmon in “The Wackiest Ship in the Army”. Located on Meckelsen Avenue SE adjacent to the rear side of the Terrace Drive-In located on Central Avenue SE. It was built by Tom Griffing Construction and operated by Video Independent Theaters Inc and subsequently sold to All State Theatres. It was a single screen facility and closed on September 18, 1978.

A closer address (at least for Google) is 9098 Mickelsen Avenue Southeast, Albuquerque, NM. The drive-in was located right next to the Terrace Drive-In on the west side. Today, the area is a housing development with no trace of the drive-in remaining. http://tinyurl.com/j9eq9j3

Opened with “Where the boys are” and “The wackiest ship in the army”.

Why the name Wyoming(it’s a long way from the state of Wyoming)?

Back then, the drive-in was on Wyoming Avenue, barely within the Albuquerque city limits. The adjacent, co-owned Terrace Drive-In was barely outside the city, which might be why it was a separate drive-in.

Motion Picture Almanacs listed the Wyoming with a capacity of 1000 cars. Its final show was on Sept. 18, 1978.

Boxoffice, Nov. 27, 1961: “The Wyoming Drive-In … was opened on Thanksgiving Day by Tom Griffing, whose Tom Griffing Construction Co. has erected more than 265 outdoor theatres over the nation from Main to Texas. Griffing will operate the new airer, which features two boxoffices, a 120x60-foot screen tower and a four-unit cafeteria-style Snak-Bar, housed in a building 100 feet long. The Wyoming marks Griffing’s return to the drive-in construction field after two years of semiretirement.”

That announcement was premature. The Albuquerque Journal wrote on Jan. 11, 1962 that general manager James T. Griffing said the Wyoming would open at the end of that month. And sure enough, the grand opening ad that rivest found and posted here is from Friday, Jan. 26, 1962. Now I’ve got to correct that in my book. :)