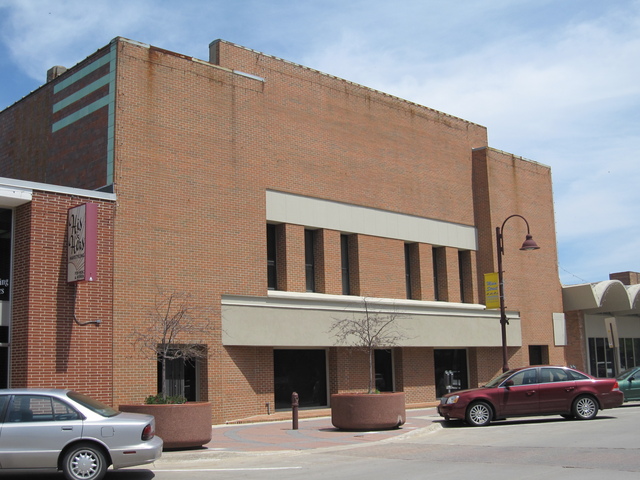 The Collegian Theater in Ames, Iowa was opened on September 22, 1937 with Bing Crosby in “Double or Nothing”. It was built at a cost of $70,000 and was owned by the Ames Theater Co. which was an affiliate of the A. H. Blank Co. of Des Moines, a subsidiary of Paramount Pictures Inc. The Collegian Theater closed January 23, 1974 with the 1972 Nederlands made animal documentary “Instinct for Survival”.

The Collegian Theatre was designed by the Des Moines architectural firm Wetherell & Harrison, according to this page about the Varsity Theatre at the Ames Historical Society web site.

Current use is as part of the First National Bank office complex. The structure has a modern dark brick faÃ§ade, but the underlying theater structure is easy to see. Photo here: http://twitpic.com/15s37w

Great looking marquee. Bet this was a beautiful theater in its heyday.

Began its run in September of 1937 with “Double or Nothing” and Western Electric’s Mirrophonic sound system. Ended its run January 23, 1974 with “Instinct for Survival.” Seven customers showed up for the beginning of the show and just one was there when the feature ended.