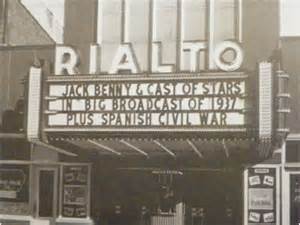 The Waukegan Theatre opened in 1910 and was designed by architect William R. Gibb. It was renamed New Barrison Theatre in 1911, and Orpheum Theatre in 1921.

It was renamed Rialto Theatre in 1934 when it became part of the Publix Great States Theatres chain, and was remodeled in 1935 to the plans of architectural firm Pereira & Pereira. The Rialto Theatre was closed in 1953.

“Workmen are now busy rejuvenating the old Rialto theater, at 25 South Genesee street, Waukegan, which has been closed for the last eight years, into a modern playhouse from plans by Pereira, Snsensy(sp) & Pereira, Chicago architects. Construction will be rushed so that it can be opened within a few weeks. One of the features of the rebuilt cinema will be its lighting effects, both on the exterior and in the lobby, which will be similar to the Firestone sign at A Century of Progress. If you saw that, you’ll remember that it held the eye with constantly blending of colors caused by concealed Neon tubes.
The exterior walls of the front elevation will be of brown porcelain enameled steel, with vermillion division strips. Both the exterior and the lobby, as well as the interior, will be extremely modern in design. The house will have 600 seats.” Before and After pictures included. Chicago Tribune, Feb 3, 1935

The principals of Pereira & Pereira, the firm that did the 1935 remodeling of the Rialto Theatre, were William Pereira and Hal Pereira. Percival Pereira was an older architect who was never a member of this firm.

My father, Kenneth C. Shaffer was manager of this theater from about 1940 until about 1951. ‎

During WWII, the managers’ of the Academy theater and the Genesee theater** were drafted ‎into military service. My dad was 4-F and ineligible because he had lost one kidney as a teen.‎ So the Publix management made him the manager of all three theaters until the other two ‎managers returned from the war. Dad went back to only managing the Rialto at that time, ‎‎[probably with a pay decrease].}‎

‎*These two theaters along with the Rialto, were the three theaters owned by national chain ‎Publix, in Waukegan, Ill. The only other theater was the independent Times Theater (second run ‎movies).‎ ‎**The Genesee Theater is now a National Historical Landmark. It was the grandest of grand ‎theaters in the Midwest, probably only rivaled by theaters in Chicago in the day.‎

The April 2, 1910 issue of the Chicago business journal The Economist had an item about a theater project in Waukegan which was most likely this house:

“William R. Gibb has completed plans for a one story theater, 47.6x126.6 feet, to be erected for Samuel Fleckles, manager of the Laemmle Film Service of Chicago, at Waukegan. It will cost $20,000.”

Architect William R. Gibb is most remembered today as the designer of a large number of Chicago’s early elevated railroad stations.