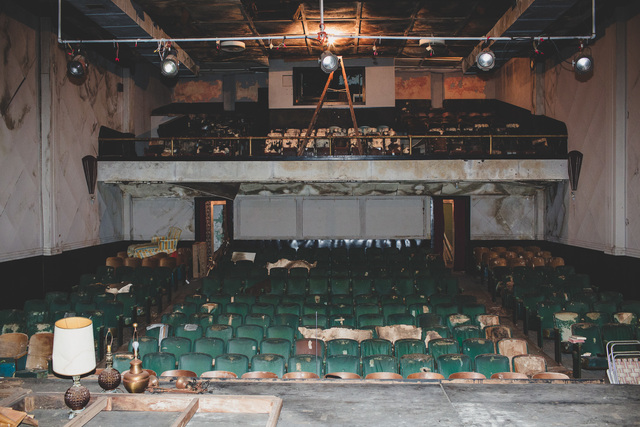 The Ray Theatre opened around 1935. By 1941 it had been renamed Bells Theatre. The 1968 edition of IMPA list it under the Chickasaw Amusement Circuit.

Here is a photo from January 2006 of the Bells Theatre.

The January 2006 photo says aka Wintergarden.

The Bells Theatre was owned by the family who owned the Wintergarden food processing plant, now known as PictSweet products. It was closed in the early ‘70s and used a storage by the company, filled with filing cabinets and old office furniture. In the mid-1970s, Joe Kincaid moved his pop-vocal studio from Alamo to the Bells Theatre. His former students included Linda Thompson-Jenner-Foster and Marty Slayton. Joe cleaned up the threatre, painted the lobby, built dressing rooms in the basement under the stage and added light and sound systems. It was used for live theatre and the studio musical productions. The projection room is still there and was used for a control room, spotlights, etc. Although it was called “Kincaid Studio,” at one point Joe hung a sign that said “Wintergarden Theatre” which was not an official name.

When Joe tragically passed away in the mid-1980s, his sister, former Miss Tennessee, entertainer, recording artist and studio singer, Deby Kincaid took over the studio and taught 150+ voice students per week until around five years ago when the roof of an adjoining building fell in. Due to structural damage, a local architect suggested it might not be safe to have the kid in every week. So the studio was moved to another location. For almost thirty years, the theatre held musical shows several times a year, with five or more performances each time to SRO audiences.

I drove by in April ‘10 and the back stage-door was open. I only had a small flashlight with me. Since it has been unused now for 5 years or so, the interior was typically damp and musty smelling. After many years as a local movie house followed by over 20 years of live musical productions involving literally thousands of young people, the theatre is now standing empty and dark. The buildings on the right side (north) have been razed. I don’t know what the future holds at this point. Downtown Bells ain’t what it used to be. Like many small towns, people shop “down the road” in the larger communities. The theatre was lucky to have Joe and Deby to keep the building alive with music and productions for 30 years. At least, the building is still there. More current photos will be posted shortly.

New Flickr set with three interior shots of the Bells Theater. Check back soon for more photos will be added.
View link

The September 2013 Google Street View shows a crew working on the exterior of the theater!

There is a committee of the Arts Council of Crockett Co. working to preserve the Bells Theater. We will hold another meeting Monday February 22nd at the Bells Methodist Church at 6:00. We need everyone’s help to make this happen. Please check the Facebook page Save The Bells Theater and make your donation to the gofundme.

I was able to go inside the theatre and take some photos. You can see more here: http://blog.cassiecastellaw.com/2016/03/bells-theatre-tennessee-art-deco-venue.html

There is a movement happening to restore the theatre, which is amazing! If anyone has any advice on restoring theatres, companies/associates to work with, or if you’d like to donate to help aid the restoration costs you can donate here: www.bit.ly/bellstheatre

The Arts Council is applying for various grants with the state of Tennessee, and one grant that’s available now matches 100% of money raised up to $500K! So far, $17K has been raised, but the minimum requirement for this grant is $25K. If you feel so inclined to donate, it will be greatly appreciated!

My Granddaddy, Ray Dolfinger, built the Ray Theater in 1935-1936. He later sold it to Dr. Sam McDonald, who renamed it the Bells Theater. I worked there as the “popcorn boy” for about 18 months and a man named Halbert Riddick was the manager. A man named “Sharkey” was the projectionist.

From the looks of cassies' I don’t think there is a decent seat left in the theatre.

Grand opening shot as the, then, Ray Theatre, in photos.