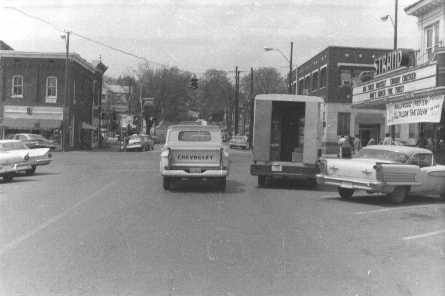 Listed in the 1964-68 IMPA under the Martin Theatre Circuit. The theatre might have been in operation under a different name or management prior to 1964 or after 1968. It was closed in 1972. By 2019 the building was in use by various retail outlets.

I’ve found the Strand mentioned in Boxoffice Magazine as early as the July 6, 1940, issue. At that time it was being operated by the Manning & Wink circuit.

The most recent Boxoffice mention of the Strand I’ve found is in the January 31, 1972, issue, at which time it was still being operated by Martin.

The September 9, 1916, issue of The Moving Picture World had an item about a Strand Theatre in Athens, but I’m not sure it was the same house:

“The old Palace theater has been remodeled, and is now known as the Strand. This house runs Metro pictures, and is owned by Manning & Wink, who operate several houses in Georgia and Tennessee.”

The Strand building in the various photos looks a bit too modern to have been operating in 1916, though it might have been remodeled again later, of course.

Just learned about this former theatre in Etowah. It’s a shame it still doesn’t exit. The b/w 1948 photo of its marquee and crowd of movie goers is a wonderful tribute photo to this theatre. Thanks Joe!