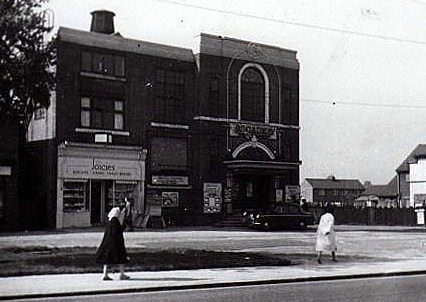 Opened as the Allenton Cinema on 17th December 1928 with Syd Chaplin in “Charley’s Aunt”. It was located on the main Osmaston Road, corner of Stamford Street in the Derby suburb of Allenton.

The architect was T.H. Thorpe of Derby, who also designed the nearby Mitre Hotel for Zachary Smiths Brewery in 1930. The Allenton Cinema was an independent and was operated by the same company that had built the Alvaston Cinema (later Rex Cinema) three years earlier. The facade was bare brick, relieved by a large window over the entrance and two pairs of narrow windows at the side. The interior was rather plain in appearance and the seating was arranged in stalls with a small circle at the rear.

In early-1939 the Allenton Cinema (together with its sister cinema the Alvaston) were purchased by the owners of the Coliseum Cinema in the City centre. They carried out a refurbishment on both properties and after two weeks closure the Allenton Cinema was re-opened as the Broadway Cinema on 7th August 1939 screening Bobby Breen in “Breaking the Ice” and George O'Brien in “The Renegade Ranger”. The interior had been given a modern Art Deco style treatment at the proscenium end.

The Broadway Cinema closed on 24th September 1960 with Tommy Steele in “Tommy the Toreador” and the Bowery Boys in “Up in Smoke”. It was demolished and a Fine Fare supermarket was built on the site. This has gone through several changes over the years from Gateway, Solo to Somerfield Supermarket. By 2017 it was a Co-Operative Local supermarket.