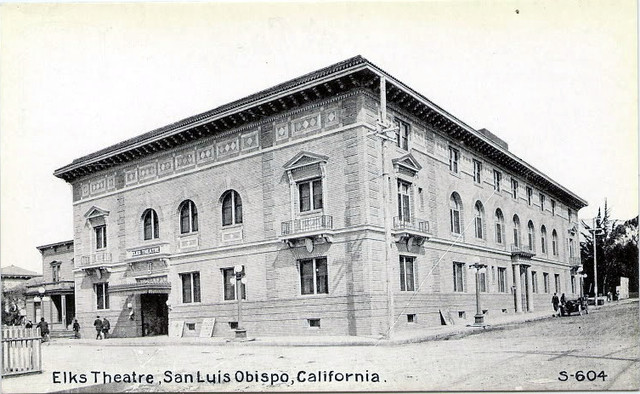 At this point, little is known about the San Luis Obispo Elmo Theatre. The Elmo Theatre opened in 1921 with a small 2 manual 4 rank style 135 piano console player Wurlitzer organ opus 260.

In the the latter 1920’s, this original Elmo organ was removed from the theatre and rebuilt by Louis A. Maas and installed in the new Obispo Theatre with 7 ranks of pipes.

The older Elmo Theatre had a second, “new” Wurlitzer installed that had previously been installed in the DeLuxe Theatre in Los Angeles. This organ, opus 430, was shipped to the DeLuxe from North Tonawanda, NY on 6/28/21. This organ was a style 210 special and included a piano. It is assumed Louis Maas also did the transfer and reinstallation of this organ into the Elmo Theatre (as he had for the Obispo Theatre organ.) By 1927 the Elmo Theatre was operated by the L. Lou Bard chain Far West Theatres Inc.

In the 1950’s, this 2 manual 9 rank Wurlitzer organ was removed from the Elmo Theatre by Richard S. Villemin (who also removed the organ from the Obispo Theatre) and reinstalled the second Elmo organ in the Malibu home of his sister Ruth V. Dresser.

The Elmo/DeLuxe Theatre console, piano, and a portion of the relay are in the Fox Theatre in Hanford, California playing a composite Wurlitzer donated in 1988 by Ruth Dresser.

Ruth Dresser eventually donated the rest of the Elmo organ (with many, many additions plus a 4 manual console from the 1918 San Francisco California/State Theatre) to the Fox Theatre in Visalia, CA.

As I recall, the Elmo Theatre was part of a larger building that was owned by the B.P.O.E./Elks in SLO. It was also my understanding that the name “Elmo” was shortened from an earlier theatre name in San Luis Opisbo, the “El Monterey”.

Another assumption could be that both the Elmo and Obispo Theatres were associated with Fox/West Coast Theatres as Maas did many pipe organ reinstallations and rebuilds for Fox/West Coast. All of this organ/theatre information came directly from Richard S. Villemin.

The Elmo was certainly demolished first. I’m not sure which theatre opened first because a firm date hasn’t been established for the original El Monterey. The Elmo apparently opened in 1912 (see comment posted by Bonnach on Jan 27, 2007, above.) The El Monterey was extensively rebuilt (though later photos reveal that the original facade remained largely intact) in 1928, which was about when it was renamed the Obispo, but that postcard photo of it looks very old, and might even predate the 1912 opening of the Elmo. I’m thinking the El Monterey might have originally been a nickelodeon, with the bulk of the construction budget poured into that ornate facade and very little spent on the auditorium.

The facade of the El Monterey (Obispo) is remarkably similar to the T & D in Salinas, Richmond and the still standing California Theatre in Pittsburg.

My parents and I were driving to Santa Cruz one early morning in the 1970’s when we saw all the smoke from the Obispo theater fire. We didn’t know what it was until we got back. Another classic building gone! I went there a few times, think I saw some kind of Sinbad the sailor movie there. I sure miss those beautiful lobby and interiors compared to today’s theaters with their plain decor.

The El Monterey theatre name was changed to “Obispo” in December 1928 and equipped or “talkies”. Why the name change? Because the citizens of San Luis Obispo couldn’t understand why “their” theatre was named for the rival county to the north…even though it was on Monterey Street. The El Monterey curtain was removed from the Obispo and installed in the Elmo during that time. In the late 1950’s the Elks Club purchased property south of town and the great destruction of 1960 began: This historic 1911 brick building was torn down, along with the high school, the old high school/junior high and three grammar schools because the local school board was reminded that the Field Act made them responsible for the death or injury of any students during an earthquake.

The Obispo Theatre building was adjacent to Sully’s bar (formerly Dan’s). The bar was robbed on the night of Dec. 28, 1975. Investigators told me that the person who broke in, set a fire in the upstairs office of the bar early Sunday morning to cover their tracks. The widow Henry C. Dalessi Estate was given two days (between Dec. 29 and New Years?) to decide to either rebuild or tear it down. Trivia: Photos of the Obispo fire are hard to date, because the marque displayed “Snow White and the Seven Dwarfs”. It took over 29 years to rebuild on the site because the city had somehow acquired the property for a parking lot! Today Plazzo Giusseppe’s restaurant sits on the site which is now referred to as Court Street, the old alley that cut between Monterey and Higuera Streets.

My Uncle, Les Hacker, owned and managed Station KVEC from the early 30’s through 1965. I lived in SF but would visit several times a year and spent my summers in SLO. I have many photos of SLO in the 50’s and recall the SLO Centenial celebration held in 1950 in the Obispo Theatre. I have shots of the interior that exciting day when Mel Venter and his Breakfast Gang held the radio show there. Also shots on the outside podium near City Hall where Earl Warren, CA Gov gave his speech; several movie stars attended. Arland Chevrolet furnished the convertibles for the Grand Parade. Also have photos of City Hall and the murder trial held there in 1950. ()

I remember your uncle Les Hacker, as I grew up just two blocks below the KVEC radio studios. They used to put on life radio dramas and a lot of us neighbor kids would sit in the audience watching the sound effects man make thunder, rain, horse hoof sounds all on a small table.

In those days radio was king. I caught the live Mel Venter Breakfast Gang broadcast at the neighboring art deco Fremont Theater one year. The San Luis Obispo Centennial parade was held in May 1956. The city got caught with it’s pants down in 2006 and were unprepared to celebrate their Sesquicentennial. All we have to show for it is a defunct website: www.slo150.com

I’ll be in touch.

Hi, I am searching for information about the Hotel Granada which was located next to Elmo Theater. The only info I’ve been able to find is this photo of the Elmo and a postcard written from the Hotel Granada stationary that says ‘next to Elmo Theater’. Does anyone have any information about the Hotel? I know it was built in 1922 and was operated as a hotel for 40 years. The original owners are Mr. and Mrs. Remage. Any help would be hugely appreciated. Thank you

Hotel: I’ve been unable to find anything about the Granada Hotel, but I think you might have the wrong spelling for the original owners' surname. I can’t find any references to a Remage family in San Luis Obispo on the Internet, but there are multiple results for a search using the terms Ramage and Obispo. This page at Find A Grave lists 13 people with the surname Ramage buried in San Luis Obispo County.

There are probably still members of the Ramage family in and around San Luis Obispo. This web page, for example says that a Tim Ramage competed in the 2011 San Luis Obispo Triathlon. A Ramage Drilling and Construction Company is headquartered in nearby Paso Robles.

If, as I suspect, the spelling Remage was the result of a typo in your original source, then the Granada was probably owned by members of the Ramage family, and it’s likely that at least one of the living members of the family in the area will know something about the hotel.

Hotel Granada- My uncle lived in the Granada with his father who owned it for a number of years. I think we would be talking about the time peiod of the early 1950’s. I’d be happy to provide info if you have some specific questions. Thanks. FYI My dad remembers the Elmo quite well and used to play in the basement, which contained dressing rooms. I also have a large umbrella vase (or gian ashtray) from the theatre that my grandmother gave me, as her father was an Elk.