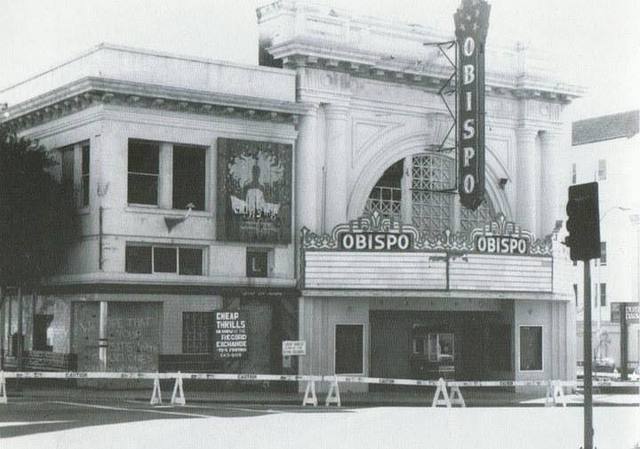 The El Monterey Theatre was opened December 24, 1911. It was located downtown about a block behind and over from the Fremont Theatre which was built in 1940. By 1927 it was operated by the L. Lou Bard chain Far West Theatres Inc. After a remodel in 1928 it was was renamed Obispo Theatre. It was not as impressive as the Art Deco style Fremont Theatre on the outside but I suspect the interior was still original when the theatre was destroyed by fire in late-1975 or early-1976. The place looked like it had never been altered.

I was a student at Cal Poly during this period but never made it inside the Obispo Theatre before it burned.

I remember seeing just three movies at the Obipso: The War Game, Dr. Strangelove, and The Godfather. The Obispo had a rectangle of indirect neon lighting on the ceiling – perhaps green lighting against a blue or purple ceiling. The spirals in the Fox Fremont’s ceiling were rather ostentatious by contrast.

Flickr user aroid presents a 1958 bird’s eye view of downtown San Luis Obispo in which three of the city’s theatres can be picked out:

On the far right is the Elmo Theatre on Morro Street at Marsh. It’s facade is well lit by afternoon sunlight, as is the upper part of its vivid red stage house.

Left of center can be seen the distinctive arc of the blade sign on the Fremont Theatre, at 1025 Monterey Street.

The large white building just right of center is the Anderson Hotel at Monterey and Morro. The Obispo Theatre’s facade, with a bit of light reflecting from its blade and marquee, can be seen just short of midway along Monterey Street from the hotel to the Fremont.

OK, so the Obispo, nee El Monterey, was on the same Monterey Street as the Fremont, closer to the center of town. The Elmo was out of the center by a bit, is that to the southeast?

Yes, the Elmo was two blocks southeast (the streets in downtown SLO being oriented more to the ordinal than the cardinal points of the compass) of Monterey Street on Morro Street. The Obispo and the Fremont were about a block apart, both on the south side of Monterey.

BTW way Joe, did you ever live in Monterey and work as a projectionist? Just curious.

No, I’ve never been a projectionist, and I’ve never had a chance to visit Monterey. I’ve always intended to spend some time in that part of the state, but so far I’ve only passed through on highway 101 and had no time to stop.

Just wondering. I knew a Joe Vogel in Monterey. he moved to Modesto some years ago.

Actually the Elmo would be southeast of the Fremont and Obispo. Today there is a bank on that site.

Anyway, there is an article about the demise of the Obispo here: Obispo Fire

Here is a photo of the Obispo Theatre.