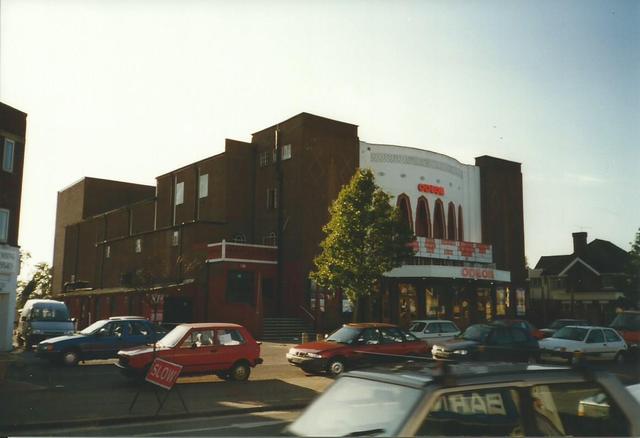 The Odeon Theatre, Barnet opened on 15th May 1935 with Gene Raymond in “Transatlantic Merry-Go-Round” and Laurel & Hardy in “Them Thar' Hills”. It was designed by architect Edgar J. Simmons, who was not a usual designer of Odeon Theatres, as this was originally intended to be a building for County Cinemas circuit and was taken over by Odeon during construction.

It was converted into a triple screen cinema from 10th March 1974 with screen 1 in the former circle and screens 2 and 3 in the rear stalls. On 18th December 1989, the Odeon Barnet was given a Grade II Listed building status by English Heritage.

It continues to serve this local outer North London suburb of Barnet as a first run cinema. In April 2015 it was announced that the Everyman Cinemas chain was purchasing four Odeon cinemas: Barnet, Muswell Hill, Gerrards Cross and Esher. The Odeon was re-named Everyman in July 2015 and was refurbished in early-May 2016. Seating is now provided for: screen 1-169; screens 2 & 3-51; screen 4-97 and screen 5-61.

An exterior photograph taken in the early 1970’s of the Odeon, Barnet:
View link

An exterior view in the early 1980's
View link

On 17th May 2010, 75 years & 2 days since Barnet Odeon first opened, it celebrated it’s birthday with 2 screenings of Hitchcock’s 1935 ‘The 39 Step’s at the opening night admission price of 2p. Staff were dressed in 1930’s uniforms including tunics, peaked caps and white gloves. The cinema’s manager announced to a packed house in screen 1 that the theatre was Odeon’s oldest cinema. I think they own older buildings, but it could well be the chain’s longest operating cinema.

Enhanced photo of the Odeon here from 1987:–

I was at the Odeon Barnet yesterday morning.I was on my own in Screen 1.Before the lights went out i was able to see much of the original art deco plasterwork and lights.Well worth a look at if you are in the cinema.

The ODEON Barnet is no more. It closed in July for a basic refurb/debranding and is now open as the Everyman Barnet. It is currently under an ‘Everything is changing’ decor, meaning that the site deliberately looks under construction until a more extensive refurb is carried out next year.

By January 2017, when I visited to see “Live by Night”, starring Ben Affleck and Elle Fanning, Everyman had carried out their usual sumptuous refurbishment.