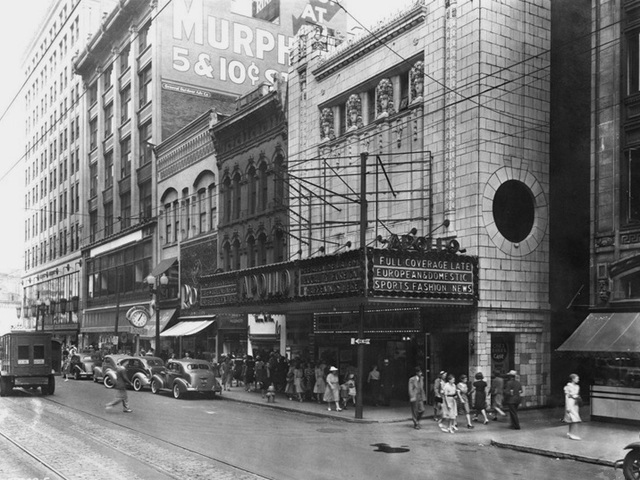 For a time in 1940 the Apollo Theatre became the only newsreel theatre in Indianapolis. It closed on April 11, 1940, claiming it was unable to get first run product. It later became a Three Sisters department store.

The Film Daily Yearbook;1940 edition list the Apollo Theatre, 17 N. Illinois Street, Indianapolis with 1,200 seats. The 1943 edition of F.D.Y. still has it listed with the same details but (Closed).

Here is an early photo of the Apollo:
http://tinyurl.com/ed9wy

The theater is behind the streetcar in this 1938 photo:
http://tinyurl.com/l2eh5

This is part of an ad in the 5/27/22 edition of the Indianapolis Star. The feature was “Bachelor Daddy”. Note the misspelling of inaugural in the ad.
http://tinyurl.com/ddzhxt

The records of Hugh J. Baker & Company, fabricator of structural and reinforcing steel and concrete, list Vonnegut, Bohn & Meuller as the architects of the Apollo. The firm’s co-founder (with Arthur Bohn), Bernard Vonnegut, died in 1908, and his son, Kurt Vonnegut Sr., became a principal of the firm in 1910. O. N. Mueller joined the firm later. Vonnegut Sr. was the lead architect on most of the firms projects.