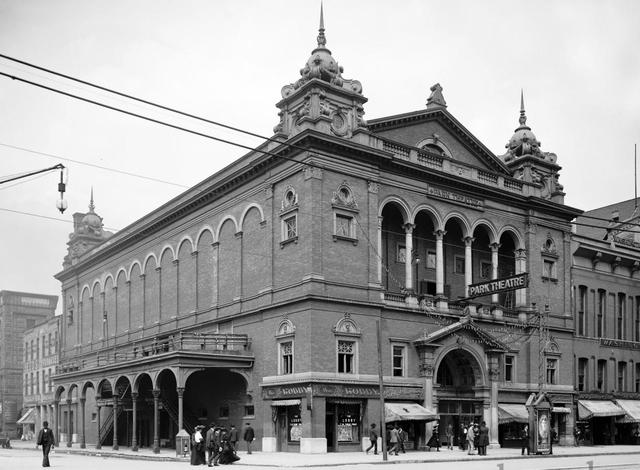 Originally opened on 27th September 1858 as the Metropolitan Theater, it was re-named Park Theatre in 1882. It burnt in 1897 and was rebuilt with the Park Theater located on the second and third floors.

Re-named Lyceum Theatre in August 1913, it was briefly re-named Stand Theatre in January 1916 until September 1916 when it recieved the name Park Theater again for the second time.

From 26th August 1923 it was re-named Capitol Theater and this lasted until final closure on 17th September 1935.

From Google Views it looks like this theatre was demolished long ago. It was just a block away from the Indiana Theatre.

Greater Indianapolis, by Jacob Piatt Dunn, which was published in 1910, noted that the Metropolitan, the first theater in Indianapolis, had been designed by architect Diedrich A. Bohlen, whose son Oscar D. Bohlen had recently designed the Murat Theatre, the city’s newest house.

An introduction to the records of the Daggett architectural firm mentions the Park Theatre as one of the projects designed by Robert Platt Daggett (the plans themselves are apparently lost, as they are not listed among the contents of the collection.) No date is given for the project, but as R. P. Daggett practiced in Indianapolis from 1868 to 1912, I would imagine that he was the architect for the rebuilding of the theater after the 1897 fire.

I’ve been unable to find any photos of the Metropolitan from before the fire, but the style of the facade as depicted in post-fire photos could have been designed in the 1850s, especially as Diedrich Bohlen was trained as an architect in his native Germany, where the classical influence was strong throughout the 19th century. It’s possible that the building’s outer walls survived the fire and were largely restored by Daggett rather than rebuilt. I’ll keep an eye out for pre-fire photos.

Comparing the 1893 and 1902 photos of the theater at the page DavidAE found, it’s clear that the facades of the rebuilt Park Theatre differed significantly from those in the original design by Diedrich Bohlen.