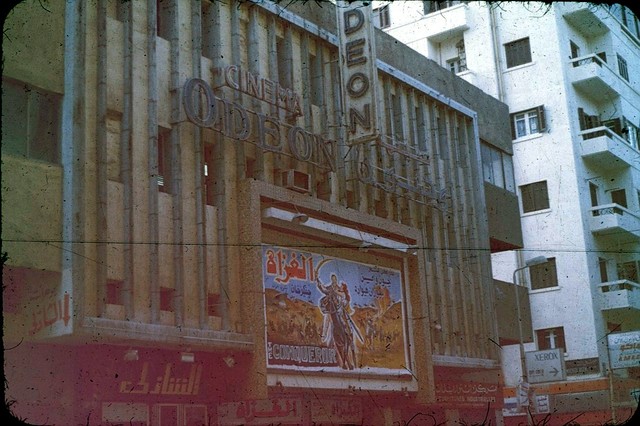 This theatre is part of Cairo’s old downtown theatre district, and is located on a narrow, tree-lined side-street about half a block off Talaat-Harb Street, where several other theatres are located, and off 26 July Street.

The Odeon Cinema was opened prior to 1950 and initially specialized in Russian and Italian films. Seating was provided in orchestra and balcony levels. In recent years it has been triplexed. Two vertical signs grace opposite ends of the facade. One, reading “Odeon” appears to be the earlier sign, if not indeed original, and the other, a backlit plastic piece, reads “Odeon Cinema Centre”. This would appear to date from the theatre’s triplexing. The center of the facade features finishes in both stucco and glass in an Art Moderne–almost Modern, style.

At present, this is yet another theatre which cannot be properly enjoyed from the exterior due to the proliferation of treelimbs which mostly obscure the facade.

Here is a vintage photograph of the Odeon Cinema when still a single screen. It was photographed by Cinema Theatre Association member John Leach in 1982:
http://flickr.com/photos/kencta/535903082/