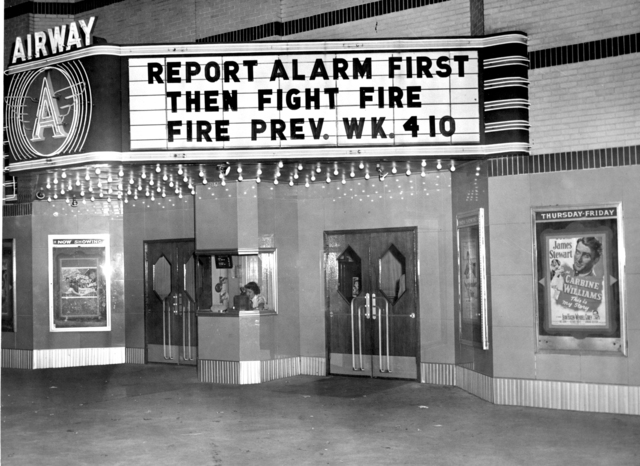 The Airways Theatre was built in 1941, opening on January 22, 1942 and was designed by architect Claude Northern. Seating was provided in orchestra and balcony levels. It was built by Kemmons Wilson who later founded Holiday Inns Inc. Advertisements from the period called it the ‘Airway’ theatre, though locals always knew it by the name of a nearby street, which is ‘Airways’ because it connected the city with the airport.

In its later years it was in use as an adult theatre, and the advertisements show the name Airways Theatre. During this adult period, the balcony was reserved for use by couples only. It was closed in 1987 and was soon demolished.

The Airways is gone, torn down in a highway realignment. It had been closed for some time. The name, ironic in view of the fact that TV put neighborhood theatres out of business, is from its location on Airways Boulevard, the road to the Memphis airport.

The Airways was showing adult films in the early 1970s:
http://tinyurl.com/8dryjc

yes, it was showing X-rated films.and they went 24 hours Friday til Subday. Boxoffice opened at 10:00 am and it was Couples Six dollars!1977 prices.Nice looking theatre to have to play adult films.

Yes it was Mike.

Don’t tell me you drove there to watch a skin flick!

Kemmons Wilson built this theatre in 1941. Ads from the period call it the “Airway” though locals always knew it by the name of the nearby street, which is “Airways” because it was laid out to go to the airport. In its later years as an adult theatre the ads show the name “Airways.” When this happened is still being researched. Though demolished now, it lasted longer because of the adult trade.

The Airway ended its days as a regular theater around September of 1965. It reopened shortly thereafter as an adult/porn venue. It was still in operation as such as late as 1987, though it may have closed that year. A Burger King now sits on part of the basic grounds.