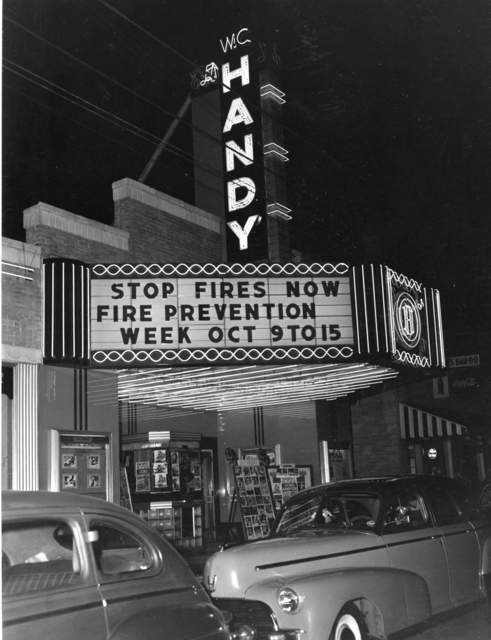 This theater was built for Memphis' black community during the regrettable era of segregation.

The architect was Raymond B. Spencer who designed a handsome dog-leg plan than also included a row of store-fronts. The single story lobby opened into the adjacent storefront which was a "milk bar" and doubled as the theater’s concession stand.

Seating was on the main floor, but small “cry rooms” were provided on either side of the projection booth.

When I last saw the W. C. Handy Theatre, the roof was going, the storefronts empty and the under-stage dressing rooms knee deep in water.

The theatre was demolished in December 2012.

Hello Theatre Connoisseurs!
I represent a small group of “next generation” children who are now coming home to take care of parents and grandparents who have called Orange Mound home for all of their lives.
As we settle in here, we are trying to help revitalize an area that has a lot of history and potential for rebirth.
The W.C. Handy Theatre is currently for sale and would be absolutely wonderful if it could be “brought back”. Do any of you know if there are channels for help (financial and otherwise) to save an historical site?? If you tell me it is possible and lead me in a good direction, I am vested in this area and will follow it through to the end. If you tell me that it’s not possible, however tragic that would be, I’ll follow your lead.
Thank you!
TPOM
(Taking Pride in Orange Mound :)

Sad looking photos of the W.C. Handy Theatre,at least it is being used as a bar now.

tisloews; GOOD GRIEF, pay attention brfore you comment! The bar photo is from 1983. Look at the photo above which is from 2008!

Sorry Bob, just a human error!But thanks for bringing it to my attention.Have a great day.

tlsloews.You and I get more folks upset than anyone else.And i don’t even try to do it.LOL.Theatre Dawg.

I know Mike,some folks get up tight over the littlest thing.See you at the movies.

TLSLOEWS, your patience is admirable. BTW it’s taken me forever to get restablished on CT. The new format looks great, but I got unsubscibed from EVERY page I was watching. I thought everyone had given up and gone home.

Thanks Will, I also had trouble getting on C.T. on my old laptop after the upgrade,I would still get the e-mails but when i clicked on them my computer would not read them said it needed an upgrade,I finally got back on using my wifes new computer.You may have gotten unsubsribed by clicking the wrong place were you click to suscribe to a theatre has changed,under it it says to unsubsribe to all pages.I almost did that my self.You can also remove any of your comments now if you wish.Good to see you back on C.T.

The W C Handy Theatre, of which Handy himself was very proud, is coming down. All that is left today, 12/8/12, is the sign and entry. To their credit, some years ago, the Orange Mound Community organization looked at rehabbing it for a community center. It was too dilapidated and unsuited to their needs so they built a completely new structure. The brick walls of the auditorium have been crumbling for months and I just saw the last vestiges this morning. It was built as an eastern venue for the stage shows so popular on Beale St. and was built with a stage and booth equipped for small stage shows as well as movies. This theater was built for Memphis' black community by the Cullins family in partnership with Kemmons Wilson. Handy attended the gala opening. The interior was not ornate but very well equipped and was a source of pride for the neighborhood for many years, finishing its useful years as a dance club. It has been boarded up for perhaps 20 years or more. The graphic by the entrance could be interpreted as a phoenix or a fighting cock. It did not prove prophetic.