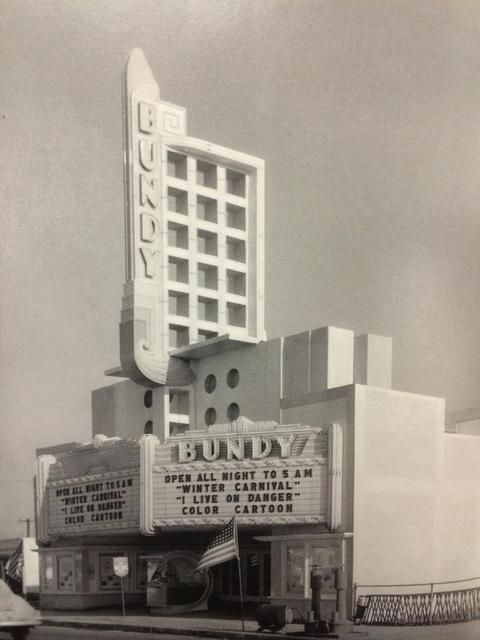 The Bundy Theatre was built for George Bourke and M.E. Baylis and opened on December 31, 1941. This standard medium-sized Fox house was razed to make way for a freeway off ramp.

This theatre was located about a half mile south of the old Olympic Drive-In, which locals know as the the drive-in with a surfer on the back of its screen.

This 1944 map shows the Pico and Bundy area before much of it was obliterated for the Santa Monica Freeway:
http://tinyurl.com/4bqm37

There is a very nice version of the LOC photo in a new book called “Historic Photos of Los Angeles”.

Here is a September 1943 story from the LA Times:

A youthful asserted holdup gang led by a 14-year-old boy gunman yesterday was captured by Santa Monica police in a wild 80-mile-an-hour chase that followed a holdup of the Bundy Theater in Santa Monica. According to police, the gang, led by Johnny Alvaro, 14, obtained $39 from E.B. Abrams, manager of the theater, and fled in a car said to have been stolen.

Santa Monica police officers gave chase as their radio told them of the robbery and the carâ€™s description answered that of the machine reported at the theater. Alvaroâ€™s companions were booked by Santa Monica police as Joe Bergin, 17, driver of the car, Henry Ford, 21, and Joe Berrard. Berrard admitted, police said, that he and Alvaro held up the theater manager. The gun used by Alvaro was owned by Ford, police said.

Alvaro admitted firing five shots at the pursuing police automobile before the bandit car overturned on a sharp curve outside the Sepulveda tunnel. One shot narrowly missed one of the officers. One boy was arrested in the car and the other three were rounded up by civilians and police as they were hiding in brush-covered hills. Alvaro gave his address as Ninth and Grand Ave., Los Angeles.

SANTA MONICA-The State Division of Highways has filed condemnation proceedings against property at 3414 Pico Boulevard for the Santa Monica Freeway right of way. Located on the property is the Bundy Theater, which closed on January 8. The state took possession two days later. The structure is under the surveillance of the State Police to discourage vandals from damaging the building. The trial date for the condemnation proceedings has not yet been set.

Construction of the freeway segment between Sawtelle Blvd. in West Los Angeles and the west portal of the Olympic Blvd. tunnel under Ocean Ave. in Santa Monica is scheduled to begin in the summer.

The theatre’s correct address is 3414 Pico Blvd.., Santa Monica, CA. The site has the wrong address at the top of this theatre page.

Was this theatre at Pico and Centinela, or Pico and Bundy? The Santa Monica – Los Angeles city line is at Centinela.

It was on Pico near Centinela. Fox West Coast Theatres listed in Santa Monica in their books and newspaper ads.