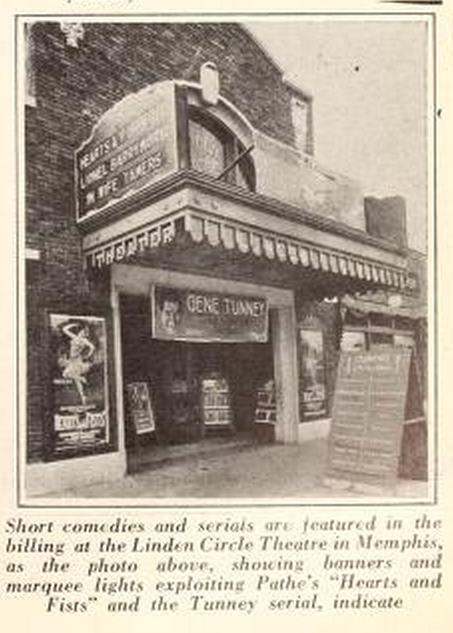 The Linden Circle Theatre opened in 1926 and was the first theatre acquired by Malco Theatres in 1929. The Art Deco front and huge marquee was installed during this time. It was their major neighbourhood theatre until the opening of the Crosstown Theatre in 1951.

The Linden Circle Theatre was equipped with a Moller organ. Both the interior and exterior were remodeled in 1952, removing the 1930’s façade, and a Panorama screen was installed. The theatre closed in the early-1960’s. It had several uses after it closed as a movie theatre. The building exists but has changed hands more than once.

In the late 1970s and early 80s on Sundays I used to bicycle all around Memphis. I usually got down to Riverside Drive, and would then go up Beale Street past the Orpheum and the Daisys to the bus garage and around Linden Circle to Peabody; then back East to the MSU area. I remember passing a church on Linden Circle, with movie theater architecture, at or very close to this address according to the maps, with a sign reading “God Save America Prayer Temple.” I never saw any people there; and since I went by on Sunday mornings, that’s probably not a good sign. Anyway, I suggest that as late as 1980, this could have been the retreaded Linden Circle Theater.

I was in the Linden Circle during the mid-1980’s when it was a short-lived, low-end antique-junk store. The seats had been unbolted and piled at the small stage end. There were vestiges of older decor visible behind art-deco era remodling.

The auditorium was broad with no balcony. The lobby sloped upward and lead past the adjacent store fronts.

The Linden Circle at one time had a 3 manual theatre organ originally at the Loew’s Buffalo. Last I heard, that organ was in a Baptist church in Jackson Tennessee minus its toys and percussions.

About 1990 the art-deco marquee and the vaguely Spanish front were covered in vinyl siding (!) in a mis-guided attempt to dress up the block.

Linden Circle Theatre November 2006.
This old theatre seems to be perfectly intact with a fairly recent coat of paint. It is located in a block where all the businesses are closed. The old night club next door was the victim of a fire, but I couldn’t tell that this building was impacted. I even went around back to get a few shots.

I drove by in July 2007 and was excited to see renovation going on. The front doorw were open and building materials were stacked inside. Will go back to get more information and photos.

I remember as a child my Father worked with a man from West Memphis AR at Chip Balwick Chevrolt on Union. Our family’s would meet at the Linden Circle Theater in the early to mid 60’s on Friday nights and go to the Mid South Jamboree to see and listen to the preformers. There would be Dolly Pardon, Portor Wanger, String Bean, Grand Pa Jones, and many more. One in particulat also was Eddie Bond who was from Memphis and did radio commericals for a funiture store in Bayhaila MS (Bill Bailey’s). I worked here in Memphis at a local bank and had a friend in a different area that I would visit from time to time and some how got on the subject about The Midsouth Jamboree and talked to her about Eddie Bond. My co-worker told that his daughter worked with her in her department. I got to meet her and talk about Eddie and told her the memories of the past.

2010 Google view shows the building still with its new clapboard siding in excellent shape, but no signage whatsoever on the building. I don’t know if it is merely dormant or used for something that puts out no signs. At any rate the building clearly looks maintained (maybe for rent). But the church listed above did not move in – they are located elsewhere in the city.

Finally found the story on the organ at the Linden Circle. It was built for the Loew’s State Theatre in Buffalo NY in 1921 – Moller opus 2888. In 1925 the Buffalo theatre upgraded to a new, larger Moller organ and Moller took #2888 in trade. It was rebuilt and renumber as #4551 and installed in the Linden Circle the following year.