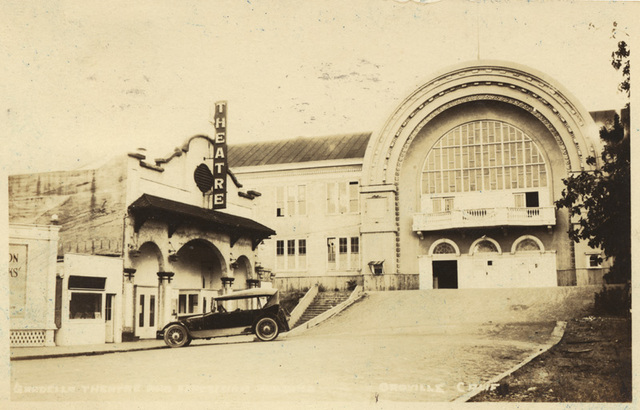 The Gardella Theatre was a good-sized theatre with a large stage tower. It was opened on December 19, 1910. A surviving photograph from the 1920’s shows a building in the early Mission Revival style popular in California during the first two decades of the Twentieth Century. It was badly damaged in a fire July 11, 1927. It seems to have never reopened as a movie theatre. The building was demolished in 1964.

There is a possible hint of the theatre’s location in this picture of Oroville’s Myers Street in 1947. In the foreground is the State Theatre, but at the distant end of the street, four blocks away, can be seen a building closing the street with a roof-line very like that of the Gardella Theatre. If this was the theatre’s location, it was right next to the levee along the Feather River.

There is also a blade sign about halfway down Myers Street, on the left, which reads “Ritz.” This may have been another theatre, but I have never come across any written reference to it, or any other pictures that would give a better view.

The 1947 view to which I have linked above looks northward, so 1555 Myers would be behind the camera. The current address of the State is 1489 Myers. I don’t know if FDY got the address wrong, or if the streets have been renumbered since 1950. I can’t think of any reason why Oroville would have renumbered its downtown streets, though, so the former seems more likely.

The “Ritz” sign in the photo would be at an even numbered address in the 1300 block. Terraserver has a 1998 aerial view of the area, and there is a building about the middle of the 1300 block that could have been a theatre. The definition of the aerial view is not good enough to tell if there is still a building at 1555, (assuming that FDY gave the correct address for the Empire.)

I’d like to go over to Oroville and take a close look at the area, but I don’t know when I’ll get a chance.

The “Ritz” was not a theatre, but a hotel/restaurant. The Empire Theatre building still exists at 1555 Myers St., but it has not been a theatre for years. It was on the same side of Myers as the State theatre, and about ½ block south. The building at the north end of Myers is the Municipal Auditorium, and the Gardella Theatre was next to it on the west side of Myers. (The Muni Auditorium is the building on the levee, & the Gardella Theatre was next to the levee, correctly stated above). I have an excellent photo of the Gardella as well as the Empire if anyone is interested. I also have aerial photographs from 1946 showing the Gardella, the Empire, and the State theatres. BTW, Myers St. is mispelled as “Meyers” in a previous post.

Since my parents own the Empire Theatre building, I can tell you some about it. It was the Rex, but suffered a fire in ‘46, I believe, and was rebuilt as the Empire using the original brick walls. Sometime in the late 50’s or '60s it was closed, and converted to stores by filling in the auditorium floor, and build three store fronts, leaving the stage area as storage. The projection room became the heating/air conditioning room, and the original ceiling is still in place in the attic. The above stage curtain light fixture is still in place, used as an attic light. Most of the original stage was uncovered two years ago, and the stage area is now used as a dance studio.
I am the current manager of the State Theater, which is owned by the city of Oroville, and is in use as a performing arts center. A complete restoration is in the planning/funding stages. One of the two Cristie projectors is undergoing repair, and should be running by this wednesday, with a showing of the Polar Express planned for the 25th as a benefit canned food drive. A coalition of local service clubs is proposing a “clssic cult film” series. Present seating is 600. We have many live performances scheduled for the year.
I have been told the Gardella suffered a projection room fire, leading to its demise, but I have no confirmation of this.
David Dewey
Oroville CA

The 1918 book History of Butte County, California, by George C. Mansfield, has a biographical sketch of Albert A. Plagge, who designed the Gardella Theatre and numerous other buildings in Oroville. Plagge was an architecture student living in San Francisco at the time of the earthquake and fire of 1906, and remained there until 1908 when he removed to Oroville. Finding that there was more money in construction than architecture he established a construction firm but continued to design most of the buildings the firm built, including the Gardella Theatre.

The NRHP registration form for the State Theatre says that the Gardella Theatre suffered a major fire on July 11, 1927. The Gardella and the Rex Theatre, which had recently been renovated, were both being operated by the partnership of Harry Seipel and A. B. C. Chamberlain, who also operated theaters in Palo Alto and Crockett. The Gardella estate announced that a new theater would be built to replace the burned house and would be operated by Seipel & Chamberlain, but soon the T&D Jr. circuit took over the project and the new house, the State Theatre, was built and operated by them. I haven’t found what became of the Gardella Theatre following the 1927 fire. Though the building stood until 1964, it’s possible that it never housed a movie a theater again after the fire.

The 540-seat new-build Gardella Theatre launched December 29, 1910 (ad in photos). It was architected by Albert A. Plagge.