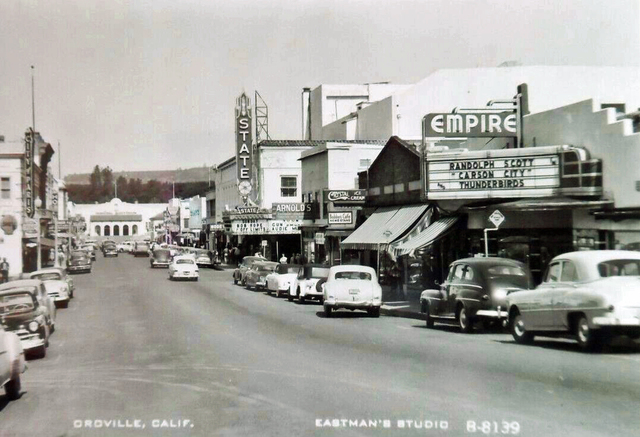 It was refurbished within the original walls and reopened as the Empire Theatre July 21, 1945 with Allyn Joslyn in “Strange Affair” & Rosemary Lane in “Sing Me a Song of Texas”. It was closed in the late-1950’s/early-1960’s and was converted into three retail units, while the stage was used for storage.

Today the stage area is in use as a dance studio.

The Empire Theatre was located within the walls of the Rex Theatre, which was gutted by fire in 1943. Due to wartime restrictions on construction, rebuilding was delayed until permission was granted by the War Production Board. The February 17, 1945, issue of Boxoffice Magazine reported that the board had authorized rebuilding to continue. A spring, 1945 opening was expected.

After the Empire was closed, the theater was converted to retail space for three shops, and the former stage was used for storage until it was converted into a dance studio, which it remains today.

A 1918 book, History of Butte County, California, by George C. Mansfield, says that the Rex Theatre was built around 1906 by Lewis Slissman and William C. Goodenow.

The NRHP registration form for the State Theatre says that the Rex was refurbished in 1927, and reopened on July 2. At this time the Rex was operated by Harry Seipel and A.B.C. Chamberlain, who also operated the Gardella Theatre in Oroville as well as theaters in Palo Alto and Crockett.

The Rex Theatre opened with Edison movies on May 11, 1913. It opened in a building constructed in 1906 and housing several businesses including a skating rink. The Rex lost favor to the State Theatre which became the town’s primary movie house. It struggled along as an independent ending its run June 9, 1942 with Olsen & Johnson in “Hellzapoppin'” It was damaged by a minor fire closing it and then all but completely destroyed by arson on July 10, 1943.

When the operator didn’t have enoough insurance money to rebuild, T. & D. Jr. got a War production board permit to construct a new theatre operating two days a week as a sub-run discount venue. The signage, seating and projection were from the Empire Theatre in Chico, also a T&D location that it closed. The new Empire opened on July 21, 1945 with a double feature of “Strange Affair” and “Sing Me a Song of Texas.”