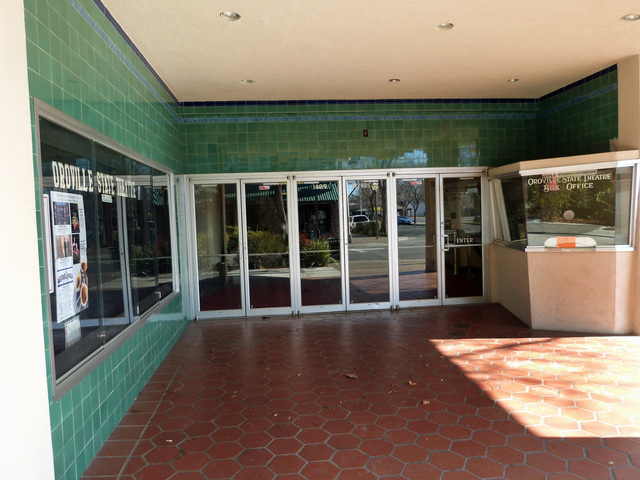 The State Theatre opened April 7, 1928 with a seating capacity of 1,529, and was originally equipped with a Wurlitzer organ. It was built for and operated by T & D. Jr. Enterprises.

In the late-1970’s, United Artists twinned the State Theatre. The theatre was purchased by the City of Oroville in 1983. The dividing wall was removed in the 1980’s, and films returned. Since then, performing arts have become the main program, with some films shown. By 2018 the Wurlitzer organ was being played again and a dedication ceremony will be held in October 2018.

The Oroville State Theatre is listed on the National Register of Historic Places.

1928 Vaudeville/Film Theater, originally equipped with a model D
Wurlitzer Theater Organ (which has been located and is expected to be returned to the theater during the interior restoration). Was split into a duplex by UA in the late 70s. Purchased by the City of Oroville in 1983. Dividing wall removed and interior cleaned, then operated primarily as a film theater, it is now primarily a live performing arts theater, but still occasionally shows films.

Exterior restoration scheduled to begin in spring 2007. Funding to replicate the original marquee and flag sign is being sought, as well as interior restoration, including re-opening of the balcony is also in the planning stages. The original auditorium light fixtures have been found in storage, but no lobby fixtures have been found. Currently searching =
for any interior photos of the theater.=20

Long-range plans call for the original 1928 grandeur to be =
restored/replicated with the building becoming the Oroville State =
Theatre Performing Arts Center.

The City of Oroville has moved its State Theatre web page again.

This is the new location.

There is a 1960 postcard on this site:
http://tinyurl.com/yj8tphp

1960 Picture looks much cooler than the 1980s.No Vertical and cheap looking sign.

From the mid 1930s a photo of the State Theater in Oroville.

Well, now it’s almost 7 years later after the last comment! The theatre is now managed and operated by STAGE, the volunteer organization that originally was just a support group for the theatre. They are calling this project the “Miracle on Myers”—the miracle being that a group of everyday folks are banding together to restore and operate the theatre as a local Performing Arts Center. Two of the most recent projects have been the repair, with plaster, of four holes in the auditorium ceiling and the installation of an access door for the Solo Organ chamber—a fire-rated door in an 8" thick concrete wall about 12 feet above the stage floor. This project cost about $20K. This is the first stage of the Wurlitzer Theatre Pipe Organ restoration and installation. This week the organ parts, which were stored in a city building down by the river were moved to the theatre’s upstairs area and a commercial storage facility above the dam, for their safety. The Theatre is in regular use as the community performing arts center and we do still occasionally show movies, usually art films or silent films, and occasionally classical films. The Projection booth still holds two functioning 35MM projectors and platter systems (as well as reel to reel capability). STAGE is constantly looking for photographs of the theatre, especially needed are interior photos. We are also hoping to find parts of the original blade sign and marquee, but if they aren’t available, reproductions will be built to replace that, um, er, OK, UGLY, Marquee that UA installed back in the 1970s. We have also inspected and have temporarily hung the original auditorium chandeliers, which were just dumped in storage when the theatre was twinned. They are actually in remarkable condition. We would love to find any of the lobby light fixtures; fortunately the same design was used in the Redding (CA) Cascade theatre, so plans are available to replicate them. Check out the STAGE webpage: www.orovillestatetheatre.com.

Well, here it is April 15, 2018, last weekend STAGE chttp://cinematreasures.org/login?return_to=http%3A%2F%2Fcinematreasures.org%2Ftheaters%2F5859elebrated the theatre’s 90th anniversary with the debut of the Mighty Wurlitzer Theatre Pipe Organ accompanying two silent films with a nearly sold-out crowd of about 500 folks (we can seat 60 if everyone can find a seat!). Check out the Historic State Theatre’s facebook page for some pics and reports. The Wurlitzer’s restoration and installation is the first major restoration work and has generated much positive “vibes” in the community. There’s still organ work to do with its dedication planned for October 2018.But right now, the Historic State Theatre joins the small ranks of theatres with a pipe organ in them, one of only about 200 in the USA!

Finally getting time to post an update. The organ is almost finished, and is still being played at almost every event. The big news is that STAGE received some major grants and are in the process of uncovering for restoration the stairway mural in the Lobby. Paint has also been stripped on selected places of the lobby walls and ceiling to determine the paint colors and decorative finishes. Repainting is scheduled for this summer, AND the replication of the long lost blade sign and wrap-around marquee has been let out for contract. We plan on a grand re-lighting ceremony early in October. Along with the grants, STAGE has entered into escrow to assume ownership of the Theatre; a major significant step in the theatre’s preservation and restoration. Next summer a new roof is planned too!

The Lobby Mural is mostly restored, and original finishes are being applied to the lobby walls and ceiling. A replica of the original drinking fountain has also been created. The Reconstruction of the original marquee is complete and it now lights up the entire block. Contract for replication of the lobby chandeliers has been let, and it is hoped they will be hanging in the lobby this summer.