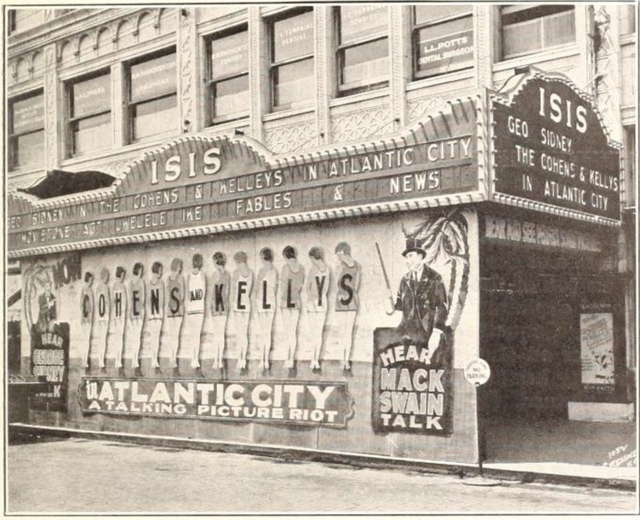 The Isis Theater was representative of a unique component of Kansas City’s past: the neighborhood theater. Opened in August 21, 1918 at the southwest corner of E. 31st Street and Troost Avenue, the Isis Theater was considered to be the finest suburban theater in the city. The Isis Theater’s owners were attuned to the needs of their customers and attention was most readily apparent in the building itself. The entrance was one of the most spacious in Kansas City, and was outfitted in decor consistent with the outside of the building and the auditorium itself.

The owners of the Isis Theater have an unrecognized but important role in the history of animation. In the early-1920’s, they employed Carl Stalling as an organist and Walt Disney as an illustrator of commercial slides for the theater. Eventually, the two men worked together on a series of small song films and this partnership took them to Hollywood, where they continued their collaboration for a short time before each branched out on his own: Stalling to Warner Brothers, where he became a composer for the studio’s famed cartoons; Disney went on to make history as head of his own production company.

The Isis Theater did have its share of bad luck, however. Three fires in 1928, 1939 and 1954 caused considerable damage, but the Isis Theater continued on showing first-run movies until 1968. Dwindling audiences resulted in a switch to adult films, which lasted through 1970. By that time the surrounding neighborhood was in decline, and the theater was frequently subject to robberies. On March 15, 1970, disgruntled youths rioted, breaking theater and store windows and engaging police in violent attacks. The Isis Theater announced its closing less than two months later. While businesses continued to occupy the rest of the Wirthman Building, the theater remained vacant. The structure was finally razed in early-1997.

My Mom worked in an Insurance Company office in the building and my Dentist – Dr. Honda was in there too. We went to a lot of movies there. What recall is the extremely large movie screen – it was considered the largest in KC. I wish someone could post some later interior pics of the Isis. I remember a lot of half moon blue lighting on the sides of the walls. When I was in 8th grage a few friends of mine used to take the bus down there and meet some girls that we first met at the El Toreon Roller Rink. The drugstore next door had fantastic sodas and malts.

My Grandfather, Kenton Zumbaugh was manager of the Isis sometime around 1929. He disappeared from Northern Indiana sometime around 1930 or 1931 leaving 3 children behind. I would appreciate it if anyone has any information regarding him that they contact me at .

Although we no longer lived in the neighborhood, my folks would take us to the movies at the ISIS. I remember in the 1940’s winter time, that that corner of 31st & Troost was the coldest place in all KC.

When I was working in the theater business, in the 1950’s, the ISIS was a 28 day sub-run house, meaning that like the Plaza, the Oak Park and the Waldo, the played a double feature of films 28 days after the left the 1st run, mainly downtown theaters. And it was part of the Fox Midwest chain.

I was a freshman at Rockhurst College in September of 1963. I went to the Isis to see some guy by the name of James Bond in the film Dr.No. And so it began. I have fond memories of Rockhurst College and the many friends that I made there. Also loved the Saturday night steak night in the schools dining facility. It was the best steak I had ever eaten, and in a school cafeteria yet.

“The Isis Theatre was where young Walt Disney showed his first animated cartoons in the early 1920s, known as Laugh-O-grams. Accompanying the picture on the theatre organ was KC native Carl Stalling, who later became known at Warner Bros. for his musical accompaniments to their Merrie Melodies and Looney Toons. Disney’s first animation studio was just down the street from the Isis at 31st and Forest in the McConahey Building. A local group, Thank You Walt Disney, bought the building and is raising money to restore it as a museum.”

Appears to have departed with a Steve McQueen triple feature with “The Thomas Crown Affair,” “Nevada Smith,” and “The Blob.“

And very technically, it was never an adult film house in the way that phrase is commonly used.