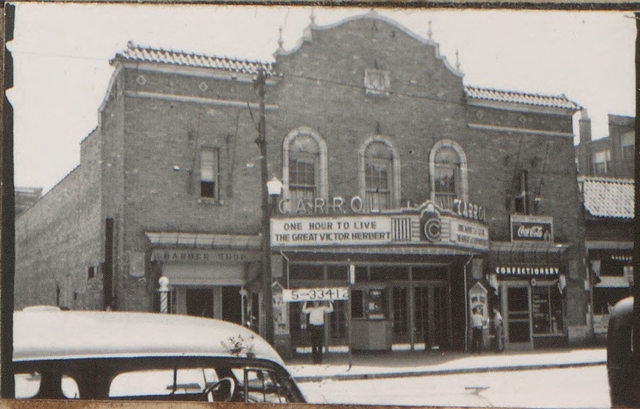 One of the many neighborhood houses that lined Troost Avenue. Opened on July 21, 1926 with Bebe Daniels in “Palm Beach Girl”. It had seating for 1,200 and was equipped with a Wurlitzer organ.

I have found references to the Bagdad Theater being at 27th and Troost on the KC Library Web site.

The address for this theater should be 2711 Troost. Per material from the Kansas City Star on July 18, 1926, the theater opened on July 21, 1926, with a seating capacity of 1,200. It had a “mammoth” Wurlitzer organ, smoking and crying rooms, a cooling system, and a “large stage fully equipped for vaudeville presentation.” The opening feature was “The Palm Beach Girl” with Bebe Daniels. Owner of the building was A. Baler and the theater was operated when it opened by the W.H. Hurley Amusement Co. It was, as Chuck mentioned, designed by Boller Brothers.

The Bagdad (and the office building around it) was destroyed by a fire on May 28, 1957. It had stopped showing movies about 3 years prior and was at the time of the fire in the process of being converted into a union hall for Laundry Workers Local No. 238.

As a young boy, my parents had very good friends that lived across the street in an apartment building. We used to go to a movie there on a few occasion. I recall that the marquee was beautifully lit up at night with all kinds of neon. Not sure what it was called then. Did the name Carrol come later in the mid 40’s?

KCB3. I don’t remember it being called anything but the “Bagdad”. We livv3d in a apartment at 27th and Forrest in the early 1940’s and my folks used to go there.