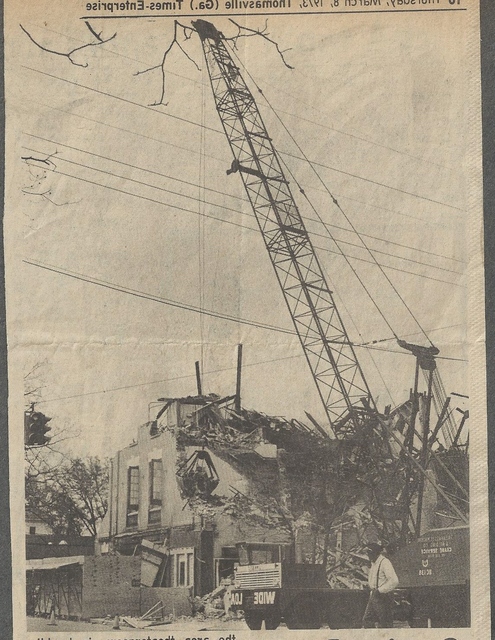 The Rose Theatre was opened in 1927, and was managed in the early years by Nat Williams. Silent films were accompanied by a five-piece orchestra.

The facade of the Rose Theatre was a three-story affair with a Spanish Tile half-roof. Two large French doors with keystone headers were placed at the second story, and two canopied windows appeared directly above the French doors on the third story.

The Rose Theatre had a balcony and a competely rigged stage with a flyhouse.

It is especially tragic that the Rose fell to the wreckers in Thomasville–a city known internationally for its preservation activities and an award-winning and highly successful Main Street program.

There is a listing in the 1968 edition of the IMPA for a Hiwa Theatre on Tallahassee Rd in Thompsonville, GA. Have been unable to locate a city within Georgia by this name and am wondering if it is Thomasville. To the point: Do you happen to know if there ever way a Hiwa Theatre in the Thomasville area and if so, could you provide some information on it? Thanks

I am pretty sure that “Thompsonville” is indeed “Thomasville” as its main corridor is Tallahassee Road (it is an hour away).

I don’t know anything about the HIWA, but I am in Thomasville often and will see what I can scrape up.

Hello Jack,
There was indeed a Hi-Wa drive in theatre in Thomasville, Ga. As a teenager and before, I attended it many, many times in the 60’s. I had great times there. There was an area down in front of parking that was a concrete pad with seats. You could actually sit there if you didn’t want to sit in the car and under the screen there were kumquat tees and, of course, we kept those emptied.
It was located on the Tallahassee Rd. just before you get to Pinetree Blvd. and where a small shopping center is now on the left. There is now a couple of convenience stores adjacent to it and a breakfast place directly across from where it was. None of this existed then. I haven’t lived in Thomasville for many years and now live in Moultrie. I’m not sure when they demolished it. It was a fun place with many memories.
Charles H. Lindsey

hello gang..i grw up in tville and was very good friends with don taylor whos dad and mom worked fpr rose and hiwa..nat williams and his son owned rpse hiwa mode ritze in tville and others in ga and fla… all had 4 letters in their names..the rose was the biggest and most beautiful it should have been saved..rose went down in 72 or 73 and hiwa in late 70s..billy j rachels class 1965 ths..excuse typos eye sight is bad

Hey guys. I grew up in Thomasville but was to young to remember the Rose theatre. If any of you have a picture of it, I would surely appreciate it if you would post the picture or send it to my email at Thank you very much.

The Hiwa drive in was located on the Tallahassee Hwy in Thomasville, GA. It was the home office of Interstate Enterprises which was owned by Nat M. Williams and after his death it was turned over to his son, Nat Jr. along with many more theatres in the Interstate Enterprises chain. The offices were located in the screen tower and contained offices and a kitchen. On one side of the screen tower was storage for popcorn supplies that supplied all of his theatres. On the other side of the screen tower was a repair shop where all of the projection equipment was repaird by Runt Crawford. The theatre had a greenhouse and several rose gardens. It was beautifully landscaped. Nat Williams was also the head of the democratic party in Thomas County and when you qualifed to run for office, you had to qualify at the Hiwa drive in. It closed in the seventies. Part of the land was sold to a televison station for a tower and the remainder sold for a shopping center. Nat Williams lived in a subdivision, which he developed, behind the drive in. The shopping center is now vacant and abandoned, the Hiwa drive in got its revenge. May someday, a drive in theatre will get its revenge on a walmart.

The October 24, 1927, issue of The Film Daily said that the Rose Theatre in Thomasville, Georgia, had recently been opened by the Interstate Amusement Company. The Rose was designed by architect C. K. Howell.