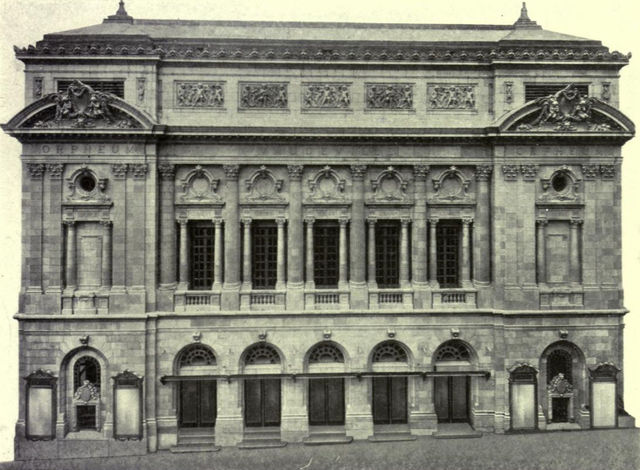 The new Orpheum Theatre was designed for a sumptuous experiences inside and out. Built to resemble the Paris Opera House, the exterior was faced with terra cotta designed to resemble Tennessee marble. Embedded along the top of the building’s façade were carved panels symbolically depicting art and music.

The lobby floor was enhanced with a random marble mosaic in figured patterns and panels. A spacious ladies lounge provided divans, lounging chairs, writing desks, telephones, and dressing tables as well as offering maid service. Inside the auditorium was a domed roof painted blue and highlighted with artificial stars. The main stage curtain was made of wire woven asbestos painted to resemble velvet drapery and weighed in excess of 1,200 pounds.

As motion pictures gained in popularity and vaudeville declined, the Orpheum Theatre owners tried to draw audiences with legitimate theatre in the 1930’s, motion pictures only from September 2, 1938 and in 1948 it was taken over by Fox Midwest Theatres. It was closed on November 2, 1955 with Clark Gable in “The Tall Men”. In November 1961 and into early-1962 the Orpheum Theatre was demolished to make room for an addition to the Muehlebach Hotel.

Kansas City and St.Louis, MO had some of the most beautiful theaters in the country and most are gone. The worst horror story is the loss of the SF Fox and the NY Roxy.

Mike, I did post them yesterday. Aren’t you able to see them?

Yes – they are wonderful – do you have any interior pics of other theaters in KC?

I’m afraid not, Mike. It sure was a beautiful theater, wasn’t it? How sad they let it be demolished, just like the Fox Theater here in San Francisco.

Even though I was a small boy, I remember that the recessed lighting was a Rose color off of the antique white and gold leaf – it was beautiful. The stage curtain was a beautiful crimson color and so were the redone seats. The orghestra seats were beutiful and taken over to the Tower Theater to prep it for the long run of Oklahoma. The screen was taking and installed at The Uptown Theater when it became obvious that it was going to be demolished. The facade was supposed to be saved for the new edition of the Hotel. Looking at what there is now – it is a crime that it was not saved.

To KCB3Player. Just to update you. The Boston Orpheum theatre is not gone. It is one of the oldest theatres in the country havimg opened in 1852 as the Boston Music Hall. It wasn’t named the Orpheum until 1906. In 1915 it was taken over by Loews(1915-1971) when it became the Aquarius until 1974. It became the Orpheum again in 1975. It was never an ornate theatre but it had it’s own character. It was never one of the 7 Orpheums. It has been a live music theatre since 1971 with a few movies thrown in. The balcony was removed years ago. Some of the biggest names in music from Rock, Country, Rap and classical have played here. It is still a grand old lady. Look it up on Wikipedia for more info.

I think there may have been a different theater in Boston than what you are talking about. It was designed by the same company the built the Orpheum Theaters in New Orleans, Kansas City and St.Louis. Maybe it was not known as the Orpheum in Boston, but was on the same circuit in the early days. Today’s Orpheum Theater in Boston is not the same theater that was part of the group of theaters built at the same time with a similar design. I will try to find out more about it. However, with that said, I am so grateful that the Boston Paramount has been saved and is beautiful again and also the theater up the street which I think is called The Lyric.

Movies only as of September 2nd, 1938. Another ad in the photo section.

Fox Midwest swapped its Missouri Theatre for the Orpheum in 1948. The Orpheum’s closed after the November 2, 1955 showing of Clark Gable in “The Tall Men.” It had closed the venerable Esquire in January of 1955.

In 1956, there was hope for one of the old theaters. Fox then had to select one of its theaters for Todd-AO and went with the Tower Theatre. It moved its next booking to the Esquire - reopening that theatre in September of 1956. And the Orpheum’s fate was sealed when Fox removed seating from the Orpheum to take to the Tower. The circuit sold the theatre the next month to a hotel firm. It was bulldozed beginning in November of 1961 and into 1962 to make way for a motel. Many hidden gems were found while razing the nearly 50-year old venue including old posters.