Arvest Bank Theatre at the Midland 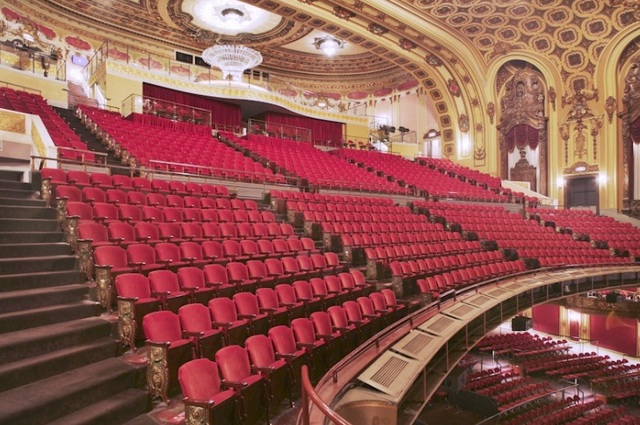 The Loew’s Midland Theatre was designed by architect Thomas W. Lamb for Loew’s Inc., opening on October 28, 1927 with Ramon Novarro in “The Road to Romance”. Films stars Ramon Novarro, Aileen Pringle & Charles ‘Buddy’ Rogers attended the opening ‘in person’. There was a stage show and organist P. Hans-Flath played the Robert-Morton 4 manual 20 ranks organ. It originally seated 4,100 patrons, with 2,000 in orchestra, 600 in mezzanine and 1,500 in balcony levels, and was built for a staggering $4 and a half million – quite an amount for a theatre in Kansas City in its day.

The organ went out of use in 1946 and on January 31, 1961, Loew’s Inc. vacated the building. The front orchestra level was raised to stage level and a bowling alley was created, opening on October 20, 1961. The organ was overhauled and played during the intermissions of National Bowling League games. This venture only lasted three months.

In early-1962 it was taken over by the Durwood Theatres chain and it was renamed Saxon Theatre, reopening on March 16, 1962 with Glenn Ford in “The Four Horsemen of the Apocalypse”. The organ console was moved to the rear of the stage to be stored and was later sold together with the organ ranks and installed in the Old Plantation Restaurant, Soland Beach, CA. (it has since been removed from that location). The lower smoking lounge was converted into a mini theatre named the Studio and a third 93 seat theatre was created out of former retail space and was known as the Screening Room. All three screens closed in the summer of 1962 due to lack of air conditioning.

All three screens reopened July 14, 1965 as the Midland Theatre. Air conditioning had been installed and the main auditorium walls were covered over and draped. The projection booth was moved to the rear of the orchestra level and in 1962 “The Sound of Music” was presented.

In 1966, American Multi-Cinema bought the theatre. A company known then for its innovations with smaller, twinned theaters now operated one of the largest movie palaces on earth.

The Midland Theatre was listed on the National Registry of Historic Places on September 28, 1977 and stopped showing movies in its 3-screens on September 24, 1981. The drapes in the main auditorium have been removed and it became a venue for stage shows, concerts, and other peforming arts.

It remains one of the grandest movie palaces ever built in the United States and a testament to the heralded work of Thomas White Lamb.

March 16th, 1962 grand opening ad for the Saxon as well as the March 23rd, 1962 ad for the Studio in photo section. Durwood’s first twin, not the Parkway.

The Loew’s Midland was equipped with a 4/20 Robert Morton pipe organ, sadly long since lost.

The Midland’s organ is not lost…it is now installed at the nearby Civic Center Music Hall.

On the day of the Apollo 15 moon landing, AMC opened the Midland 3 (combining the Midland with The Screening Room and the Studio Theatres under one name literally overnight) on Friday, July 30, 1971, with Sean Connery in THE ANDERSON TAPES (the ‘old’ Midland) while adding in their respective ‘new’ auditoriums Debbie Reynolds in Curtis Harrington’s WHAT’S THE MATTER WITH HELEN? (prev. Screening Room) and Woody Allen in BANANAS (prev. Studio). There was no explanation for this new iteration.

The Midland 3 and the Empire 4 on 14th & Main were suddenly combined without explanation by AMC to create the Midland-Empire 7 on Wednesday, September 11, 1974. The Midland itself would be listed first as Auditorium 1 in the new designation. It was showing Rollin Binzer’s 1973 documentary LADIES & GENTLEMEN, THE ROLLING STONES.

AMC closed the Midland/Midland 3 permanently on Thursday, September 24, 1981 while leaving the previous Empire 4 open. The Midland was showing Tony Anthony’s 3D import COMIN' AT YA! (the features changed the next day so much at the remaining Empire that it’s impossible to tell what the Midland’s other two auditoriums were showing at closing, perhaps THE ELEPHANT MAN & ORDINARY PEOPLE going by descending listed order).

ORIGINAL SEATING CAPACITY IS WRONG! IT SEATED 1500 IN UPPER BALCONY, 600 OM MEZZANINE AND 2000 ON MAIN LEVEL UNTIL IT WAS ALTERED BY REMOVING SEVERAL ROWS TO PROVIDE MORE LEG-ROOM.
I KNOW BECAUSE I WAS THE ASSISTANT MANAGER FOR MR DURWOOD.

Now called the Arvest Bank Theatre at the Midland.

This opened on October 28th, 1927. Grand opening ad in the photo section.

July 8th, 1966 grand opening ad for the “Screening Room” in the photo section.