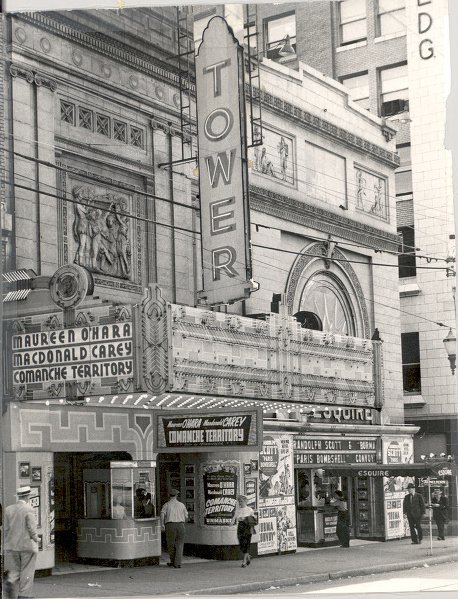 The Pantages Theater was a downtown landmark, largely in part to its 180-foot high tower topped by a revolving electrical sign blazoning the theater’s name. As part of the vaudeville circuit established by Alexander Pantages, the theater catered to a mass entertainment audience rather than the traditional cultured theatergoer.

Three shows were held each weekday, four on Saturdays, and five each Sunday. This arrangement brought success to the theater’s owners from the opening night on August 27, 1921 to the beginning of the Great Depression. By 1931, the theater, like many around the country, closed for three years.

New owners eventually took over and reopened the Pantages Theater as the Tower Theater on April 13, 1934. Adding motion pictures to the program, the theater survived. In the 1940’s, the Tower Theater was operated by the Fox Theatres chain. Stage shows also continued until 1947 — one of the last vaudeville houses in the country when it switched to movies-only.

By the late-1950’s, Kansas citizans became enamored with television and their patronage of downtown movie theaters like the Tower Theater diminished dramatically. Other priorities emerged for the land upon which the Tower Theater stood and a parking lot replaced the building when it was torn down in 1960.

Warren: There was an earlier Wonderland Theatre in KC in 1926. See the article on this page of The Reel Journal, May 2, 1925 (Headed “War Pictures…” etc.)

As for the Twelfth Street Theatre which, according to some Boxoffice reports, had been a burlesque house and later became the Downtown Theatre and then the Esquire, it’s listed here now. I’ve been puzzling out the time-line of the names, and might have it right. It was the Downtown Theatre when Fox Midwest took over in 1938 and changed it to the Esquire, so Wonderland name must have been used for only a couple of years. It was next door to the Tower.

And so there’ll be something about the Tower in this comment, a May 3, 1947, Boxoffice item says that Fox Midwest operated the Tower as a double-feature house starting in 1939, and in 1947 was returning it to its earlier position as the circuit’s “A” house in KC. The Esquire which had been playing first runs day-and-date with the Uptown and Fairview, but from 1947 the Tower filled that role.

I am trying to locate some different interior pics of the Tower and Orpheum Theaters. Mainly the Auditorium Pictures. Also, trying to find a serious of demolition pictures. They used to be avaialable with the Kansas City Star and the KC Public Library but I can no longer locate them.
Please call me at 816 347-0487 if you have any.
thanks,
Mike Gallagher

After reading some of the above articles, I have done some research at the KC Public Library. The Tower was for a short time from about 1950 until it closed in the mid 50s as the Fox Tower Theater. In 1952 a slightly curved very wide Todd-A-O Screen was installed for the exclusive run of the film Oklahoma. It was actually fixed in the sense that the Stage Curtains and the stage itself could not be used. The Theater had been nicely spruced up and repainted – it was beautiful. I still remember it even as a very young boy. When the theater was closed and being prepared for demilition (it is in near perfect condition) – the screen and sound system were taken to either the Brookside or the Plaza Theater and installed. The wide screen at The Orpheum Theater and the stage new stage curtains installed at the Orpheum were re-installed at the Uptown Theater. Finally, the Esquire was never the Wonderland Theater – that was a different Theater right across the street that was demolished in the 50s along with a beautiful theater on McGee Street.

I have a story to tell about the Tower. In 1958, I was the assistant mgr. at the Fairway in Fairway, Ks. The manager I worked for, R. Hill, had been the manager at the Tower for a number of years. He was there doing the runs of “Oklahoma” and “South Pacific”. One of his other duties was the advertising of the theatres in the KC Star. He did the group ads for all the Fox theatres and the display ads for the first run unit, The Tower, Uptown, Fairway and the Granada. He had also been doing this while he was at the Tower. One day, he needed some mats, I believe they were called, for some ads he was doing. So of this stuff was still stored at the Tower. Mr Hill went down to the theatre, and he said as soon as he unlocked the front door, he got the creepy feeling he was not alone there. He hollered out, and soon heard someone running and a loud crash. He turned around, went and locked himself in the Box Office and called the KCPD.

The police came and inspected the building. The loud crash he had heard was someone breaking thru one of the auditorium emergency exits. These doors had all been braced shut with 2x4 wedged under the panic bolt so the doors couldn’t be opened from the outside. The door in question, had its 2x4 broken by the unknown person leaving in a hurry. A inspection of the theatre showed that someone had been living in the place. There was a bed roll, some food, dirty clothes, etc.

Great story – I enjoyed our conversation Don – after we spoke I did remember that the wide screen and matting from the Orpheum Theater used for The Robe was indeed taken over to the Uptown Theater even though the Orpheum was not part of the Fox Midwest Chain. It was being prepared for demolition and I think that took place in early 1960. The demolition of the Orpheum Theater was contracted with the same company that destroyed the Tower and the Esquire Theater. The demolition was delayed because there was a serious plan to save the facade of the Orpheum because it was a replica of the famous Paris Opera House and so was the Lobby. I think there was a lot of happy people thinking this would be nice to still have. With regret, the demolition company began with the roof in the front and the facade was seriously damaged within the first couple of days of demolition, so the plan to save it was scrapped. Very sad loss to KC (both the Tower and the Orpheum). They were both among the most beautiful theaters in North America even nicer than most of the Broadway Theaters and had much larger stages and back and below stage facilities and dressing rooms.

I just stumbled across a very interesting map prepared by Fox Midwest Theatres in 1950. It shows all the theaters in the greater Kansas City area, and the legend lists all the theaters by their clearance zones. It can be seen online at this link.

Hey Joe, Thanks for the link to the map. It is very interesting.

I came here because I was listening to an episode of the Old Time Radio program – “Dr. IQ” that was broadcast in 1942 from the Tower Theater. I hadn’t heard of it – too many of Kansas City’s old movie theaters, especially those downtown, have been destroyed. I moved to Kansas City, MO in the mid-1980’s and the only theaters downtown are still there, although 1 has been majorly remodeled.

This reopened as Tower on April 13th, 1934. Grand opening ad in the photo section.