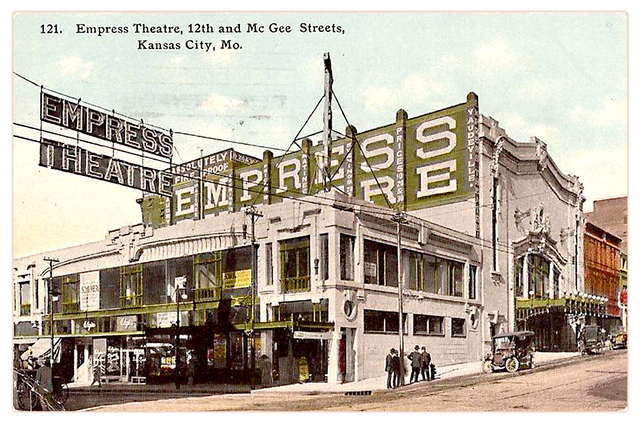 The Empress Theatre, at the northwest corner of E. 12th Street and McGee Street, with its handsome front and marquee on McGee Street, was built by the Sullivan and Considine Vaudeville circuit. At the time it was considered one of the most modern vaudeville houses in America.

With the decline in vaudeville it became a burlesque house. It was wired for sound in 1936 and began screening adult movies. In the fall of 1936 a proposed 40-week burlesque season lasted only 12 weeks' movies. In February 1938 there was controversy over the Czechoslovakian movie “Ecstasy”, directed by Gustav Machary and starring Hedy Kiesler (aka Hedy Lamarr) which threatened to close the theatre for time, but the film played on in spite of the critics.

The entire structure was demolished in summer of 1940 to make way for an eight-level parking garage for the Traders National Bank. The basement of the old building was reinforced and is used for bank storage purposes.

Charlie Chaplin’s last performance with the Karno Vaudville Company was at the Empress Theatre in Kansas City. Ealier, he had been contacted by Mack Sennett to join the Keystone Studios in Calf. Chaplin seperated from the Karno Company after the KC performance. We all know what happened after that !!!
a

Charlie Chaplin’s last performance with the Karno Vaudville Company was at the Empress Theatre in Kansas City. Ealier, he had been contacted by Mack Sennett to join the Keystone Studios in Calf. Chaplin seperated from the Karno Company after the KC performance. We all know what happened after that !!!
a

The actual architect for the Empress Theatre was Lee DeCamp. The Kansas City Journal of February 1, 1910, said that pouring of the foundations for the new theater of the Sullivan and Considine vaudeville circuit was to begin that day. I’m not sure what role the Boller Brothers filled in the project, but it was most likely to supervise construction for DeCamp, whose office was at the time located in Cincinnati.

Many Sullivan and Considine houses were called the Empress, and a number of these were designed by DeCamp. Among them was the Empress in Sacramento, California, which was later renamed the Hippodrome, and then gutted and rebuilt as the Crest in the late 1940s.

An item in the August 7, 1915, issue of Moving Picture World said that DeCamp had by then designed more than forty theaters, and had several more in the works. His most recent commission was for a theater to be built at London, Ontario, for Canadian showman C. H. Bangs.

Are there any interior pics of the Empress. As a young boy, I can remember seeing it being demolished while riding in a 12th Street Streetcar on several occasions. It was a very large theater and maybe even larger than the Tower on 12th Street.

A postcard of the Empress Theater can be found here:

From the early 1900s a postcard view of the Empress in Kansas City.

The Empress facts are well documented but sadly not on this site. Just to clear up the key factual errors, the building was not converted to retail or was it demolished in 1956. It began as the primary “A” vaudeville theater in the city with a prestigious 99-year lease. Kinodrome motion picture shorts were featured at the outset with a projection booth from the beginning. But when the Globe opened a year later on August 27, 1911, it would get the “A” vaudeville bookings… but not before Charlie Chaplin wowed crowds with his pantomime act on the Empress stage in week-long runs in December of 1911 and June of 1912.

From there, things get fairly predictable as better theaters are built, the Empress slips rung by rung. Its 99-year prestige lease is renegotiated to fit a more common 30-year leasing cycles with low-priced front-end six-month and one-year financial incentives designed to fill the house quickly at each vacancy. That leasing pattern attracted lesser live plays, third-tier vaudeville and burlesque starting with the upper tier Mutual Burlesque. Then the burlesque became more tawdry with better burlesque moving to better venues. As a burley house, the Empress became a place where arrests and shake downs became common. If nothing else, it got the venue in the newspaper headlines.

True that in 1936, a scheduled 40-week vaudeville run shuttered after just 12 weeks. But things devolved further as the building was then equipped for the first time with sound film gear and became an exploitation film theater with adult-only films. Programmed by Richlynn Amusements, movies began on August 14, 1937 with continuous showings of the silent syphilis film “Damaged Goods” supported by the notorious sound documentary, “Killers of the Sea.” Things devolved further when the flagging theater went full grind house mode adding live African American burley shows in which stage help was recruited with classified ads requiring no previous stage experience (and no union card needed there, obviously). Shows began before noon and ran past midnight.

Union issues and censor board matters hounded the Richlynn’s short existence at the Empress. When the Royal was told not to run the film, “Ecstasy,” the Empress used its biggest ads yet to trumpet the film’s opening in February of 1938. The much needed scrutiny by the city and press did drum up clientele. The lightning rod film, “Baby is Born” was the next major hurdle as the city manager said the Empress could only show the more acceptable, “Birth of a Baby.” Richlynn moved on at the end of a one-year lease in August of 1938 wringing ever last quarter it could from the then-faded location.

The Empress’ reworked 30-year lease was up in 1940 and the building was razed by the Bonded Building Wreckers Inc. after it had a salvage sale. Even the sale seemed tawdry with blue, green and white marble offered cheap, glass beveled doors at ten bucks a throw, and brass railing at 20 cents a foot. The press even followed some pieces such as the theater’s ornate box office to its new location as the Empress still attracted some following. The building was demolished for parking in the Summer of 1940.