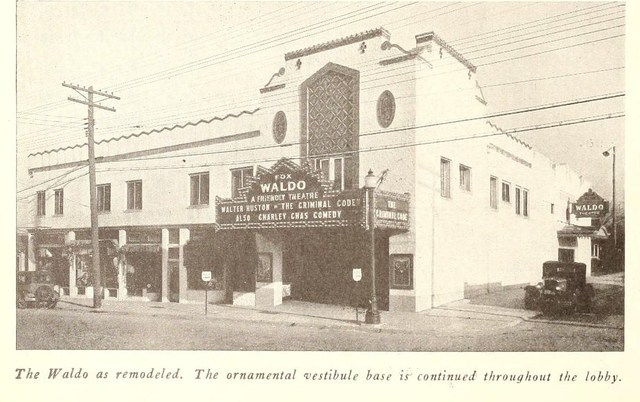 Originally known as the Westmoreland Theater when it opened in 1924, the theater offered silent films, vaudeville and burlesque during its first 15 years in business. By 1939, the theater was solely a movie house and had changed its name to the Waldo Theater. It remained a movie house until it closed on November 7, 1972 with Marlon Brando in “The Godfather”.

In 1973, local theatrical producers Richard Carothers and Dennis Hennessey took over the vacant Waldo hoping to replicate the success of their midtown dinner theater Tiffany’s Attic. Spending $750,000 into refurbish the theater, the Waldo was outfitted with a 1920’s motif and oil paintings of silent screen stars. Plans were even made to create a sidewalk ala Mann’s Chinese Theater, where the lead players of each show would imbed their footprints in cement.

The new theater, dubbed the Waldo Astoria, opened on August 25, 1973, and ultimately proved to be as popular and successful as its sister house. Carothers and Hennesey, though, had long wished to open a dinner theater in Johnson County, Kansas, where large numbers of their patrons resided. Moreover, the building housing the Waldo Astoria required frequent, expensive maintenance. Several summer performances were cancelled one year owing to a breakdown of the air conditioning system. By 1990, circumstances were favorable for relocation: favorable zoning changes, liberalization of Kansas liquor laws, and heightened customer interest. The two owners closed the Waldo Astoria in April of 1991, and by the fall of that same year opened the New Theatre Restaurant at 92nd and Metcalf in Overland Park, Kansas.

But there was still interest in keeping theatrical activity alive at the Waldo. However, after another failed venture in the Waldo Theater, nearby businesses began clamoring for more parking and the portion of the building that housed the auditorium seating area was demolished. The eastern facade and lobby of the Waldo Theater were retained for other commercial uses, but the Waldo Theater is gone forever.

On February 16, 2007, a fire destroyed the lobby and facade of the former Waldo Theater which had housed the Waldo Astoria dinner theater and later retail space.

If you compare the picture of the bakery with the ones located at the other links, it’s obviously the same building or at least the facade.

The remaining building lobby and facade that was formerly the Waldo-Astoria Theater (aka Westmoreland) was destroyed by fire on Friday, February 16, 2007.

The building is a complete loss and will have to be demolished.

The auditorium space had previously been demolished for surface parking for area businesses, but the lobby and concession area had been converted into retail space.

The link may go dead at some point.

Here is the story from the Kansas City Star:

Five Kansas City firefighters suffered burns this morning during a fire that started about 10 a.m. in a two-story building at 75th and Washington Street.

After an apparent â€œflashoverâ€ engulfed the firefighters, battalion chiefs ordered all firefighters out of the building, sent in a rescue team, took a head count to make sure everyone was safe and called for a second alarm to get more fire equipment on the scene.

Multiple ambulances responded and transported six firefighters to area hospitals. One did not need treatment, one was treated and released and the other four have been admitted to the burn unit at the University of Kansas Hospital.

All are expected to recover.

â€œThey (the injured firefighters) were able to find their way out of the room, which is good,â€ Battalion Chief Joe Vitale said. All five were wearing their breathing equipment, which prevented respiration injuries, he said.

The firefighters entered the smoke-filled building looking for the fireâ€™s cause, Vitale said. The room suddenly exploded in flames from floor to ceiling, which is known as a flashover.

A flashover occurs when heat from a fire canâ€™t escape and builds until all objects suddenly reach their ignition temperature, and flames suddenly ignite over all the surfaces and objects.

In this case, â€œthere was nowhere else for the heat to go,â€ Vitale said.

Vitale didnâ€™t know where the fire started or what caused it.

Fire officials initially reported that two firefighters had critical injuries and three suffered serious burns. By early afternoon, hospital officials had confirmed two patients in serious condition, one in good condition and one who had been treated and released. The condition of the fifth firefighter was unknown.

Once the site of the Waldo Astoria dinner theater, the building that burned contained Kennedyâ€™s Bar & Grill, CafÃ© Apanaire, the Frankly Basic clothing store and the Gown Gallery.

One bystander, Samatha Skaggs, said it appeared that the fire started inside Kennedyâ€™s, 7428 Washington, and that flames spread rapidly after firefighters entered. One firefighter came back out covered in flames, she said.

â€œIt started out small, just smoke,â€ said she. â€œThen it billowed into flaming disaster. â€¦ I just pray that everybody is OK.â€

Crews continued to battle the blaze from outside. Part of the roof collapsed before 11 a.m. as smoke and flames poured out of the building. Crews battling water pressure problems shut down water to one pumper to give other trucks more pressure. Vitale didnâ€™t know to what extent the lack of water pressure affected operations, but he said the city water department was called to help boost pressure.

Additional fire crews were ordered about 11:10 a.m., and firefighters said they feared the building would collapse. Much of the roof did.

A co-owner of Kennedyâ€™s said that employees usually arrive after 10 a.m., so no one would have been preparing food at the time the fire started.

Erica Titus, a former worker at Gown Gallery, had headed there to visit former co-workers before realizing the building was on fire.

At 12:15 p.m., fire officials said their crews had gained control of the fire, and they werenâ€™t afraid that it would spread further. Four trucks continued to pour water on the blaze.

George Throener, who was at a coffee shop about a block away when the first fire trucks first arrived, said he watched bakery workers knock on other doors to tell people to get out.

â€œI saw one (firefighter) come out, and his hands were burnt,â€ he said.

Paramedics wrapped his hands in gauze and put him in an ambulance, he said.

Another childhood memory brought back to me! I LIVED at the Waldo through grade school. Nearly every Sunday my friends and I would go to the Waldo for the double feature, then walk over to Katz Drugs for a phosphate, while waiting for our ride home. I didn’t realize it was that large though. I had many a birthday party celebration there. It was a much-loved theater. I am going to search for some pictures!

Closed for good by Commonwealth on the evening of Tuesday, November 7, 1972/Election Day, with 50-cent admission to Francis Ford Coppola’s THE GODFATHER (Kansas City Star)

Like lorraine1031, I remember the Waldo Theater just a block and a half from the Katz with its soda fountain bar by a row of wooden telephone booths. My strongest memory was when, as a grade-schooler in 1971 or ‘72, I saw a four-movie Beatles marathon there. Little did I know how soon it would close after that. Thanks for keeping the memories alive!

Boxoffice, Aug. 1, 1953: “The grand reopening of the Waldo Theatre, Friday (24) was held to introduce Commonwealth Theatres to the neighborhood, according to Eddie Mansfield, city manager. … Until July 1 the Waldo was a Fox Midwest house. … The new concession bar, by the way, is something of which the theatre is very proud. It was designed by Clark Rhoden, younger son of Elmer Rhoden st., who also supervised its construction. The building is owned by Mrs. Rhoden, hence Clark’s special interest in it.”