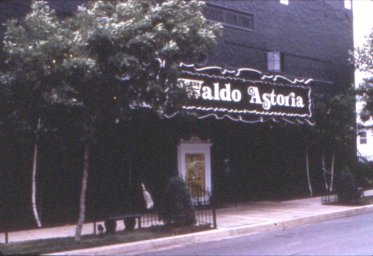 KANSAS CITY, MO — The Waldo Astoria Theater, which opened in 1924 as the Westmoreland Theater, was destroyed by fire Friday, February 16. It is a complete loss.

Five firefighters were injured and hospitalized fighting the two-alarm blaze during freezing temperatures and inclement weather. Five remain hospitalized; three with burns. Their efforts could not prevent loss of the building, but adjoining retail structures were spared.

The historic building burned for several hours and the roof collapsed. Problems with water pressure from hydrants hampered efforts.

Local media have reported that the fire appears to have started in the French bistro Cafe Apanaire. The cause of the fire is undetermined and is under investigation.

The Westmoreland Theater operated until 1939 as a silent film, vaudeville, and burlesque house located on what was then the southern edge of Kansas City in the Waldo neighborhood. The Boller Brothers, a local firm specializing in theater design, are credited as architects. The Westmoreland later became a cinema called the Waldo Theater, and showed films until 1972.

In 1973, local theatrical producers converted it into a popular live performance dinner theatre called The Waldo Astoria. It closed in 1991 when the producers moved the operation into a neighboring suburban community.

In 1991, the theater became the Theatre at Waldo, a multi-purpose venue that served a collaborative project between the Kansas City Jazz Commission and Theatre for Young America (TYA). The collaboration lasted two years.

By 1995, nearby businesses requiring parking pushed to have the auditorium portion of the theater demolished, but the lobby and facade were retained for commercial use.

(Thanks to the Kansas City Missouri Public Library for providing the photo.)