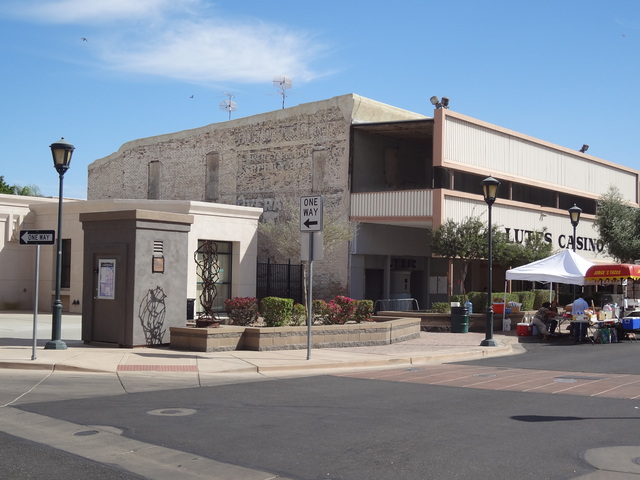 The Lyric Theater, on Main Street near 2nd Street, was open from at least as early as 1925. In the 1940’s it was operated by Silver Crest Theaters. It operated until the late-1970’s. It remains vacant today. The next door Casino Theatre, now a restaurant, also opened in 1925 for movies.

Any further information on the Lyric would be appreciated.

As someone who is obessed with both old gorgeous theatres and abandoned buildings, I LOVED the photos of the old Lyric. Do you have any more Bryan? my email is .edu

A business license was issued for the Lyric in June 1975, perhaps to the last owners of the business, according to the Yuma Daily Sun:

There were seven business licenses issued by the city of
Yuma during the period of June 10 through 17. They were (excerpting):
Lyric Theater, Western Theaters of California, 211 Main St.

Next Saturday and Sunday:
“If You Believe It, It’s So” – A Paramount Picture

A young man who really gets involved in his business has taken over the Lyric Theater on the Downtown Territorial Mall. It has been closed the past year. Gerald Thomas, who has theaters at Taft and Arvin Calif., began in the business as a janitor in San Francisco
when he was 10 years old. He is now 28 (and unmarried) and owns Thomas Theaters of California.

“Theater management always has problems with unruly patrons, characters trying to enter the theater who would pose a danger or threat to those inside. When I have such a problem, I get right in the middle and solve it myself,” Thomas said. “People who are too drunk or people who cause a commotion in the theater do not belong in there, I get them out.”

Thomas plans to open the Lyric Wednesday with a matinee showing of “The Island at the Top of World.” “I’m going to be showing second-run movies,” he said. “They’ll all be family-type movies generally rated G through PG with some Rs like "The Godfather.” There’ll be
no X-rated movies. Thomas has installed all newly reconditioned projection equipment and refurbished the front of the theater.
The screen will be about 60% brighter than before,“ he said. "Kids are welcome. They’ll be safe in my theater.”

The LYRIC is owned by the Lutes brothers who operate the Casino restaruant next door. From what Bob Lutes told me a couple years ago I didn’t think it was older than the late 1930s or early 40’s. Does anyone know if the Lyric was ever operated as the Casino theatre. I have been going nuts trying to track down a Casino theatre in Yuma.
Ken MC – could you email me off line about your 1923 data above? Email me at Thx. Don Story

I’m sssooo glad there are people that are out there that still care about the old lyric. i lived her in yuma my whole life and seen things come and go and ive walked downtown many times and see all the old and closed buildings down here. I would love to go in and see the lyric inside for once. My grandma told me little stories about working for the theaters down town that she would make popcorn and take them to the lyric and yuma theater and i think at the time there was another one and she also worked at KRESS. But i wish i could fix it up and open it and show some old movies or something i wish i had the money but i hope one day it does get fixed up.
well if anybody has any more pictures of the lyric and knows who own it please let me know email me at
thanks,
Daniel

Here is a September 1956 ad from the Yuma Daily Sun:
http://tinyurl.com/yrp4ox

There was a Casino Theatre operating in Yuma as early as 1916, when it was mentioned in the January 16 issue of The Moving Picture World. The operator was Johna Johansen.

My uncle, who is now 97 years old, remembers going to see serials at the Lyric in Yuma. But a family friend who is also a Yuma native, recalled that – presumably in later years – going to the Lyric was scandalous. I think that by the early ‘70’s it had become an X-rated theater. I asked, “Was it a burlesque house?” She answered, “No, but what went on in the audience was! If you got caught going to the Lyric, you were in TROUBLE!” It was definitely a B-movie house in its best days, but later I think it fell on hard times. So to speak!