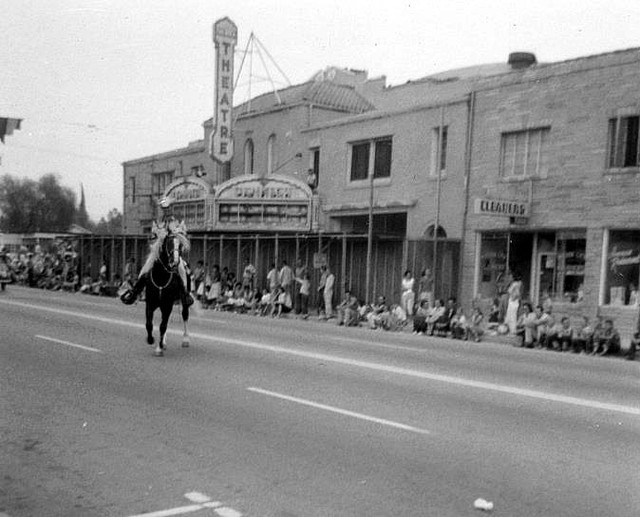 Rennie’s Theatre was opened in 1925. On August 14, 1967 it was renamed Crest Theatre. It was still open as a movie theatre in the San Fernando Valley as of January 20, 1980, showing Spanish language films and re-named Azteca Theatre. Now operating as the Praise Chapel Christian Fellowship.

The San Fernando Redevelopment Agency discussed plans to renovate the building back in June 2006. I don’t know if anything became of that.
http://tinyurl.com/59eo4s

There are some renovation photos on the church website:
http://tinyurl.com/3jxl3b

The Azteca is presently undergoing a complete remodeling, and it is unlikely that anything from the past will remain. Yesterday, part of the word “Azteca” was visible on one outside wall, but that too will soon be gone. We managed to go inside and talk to a few of the guys doing the work. It’s going to become a live venue. There’s a stage, and lighting already in place. It also appears that they enclosed and leveled off the balcony.

Here is a part of a long article on Spanish-language theaters in the LA Times on December 31, 1984:

The line outside the Azteca Theater in San Fernando begins to form when the Spanish-language Mass ends at a church less than a mile away. Family after family arrived Sunday, close to 900 people eventually filing through the theater doors to see the double feature-â€œNino Pobre, Nino Ricoâ€ and â€œAlla en Plaza Garibaldi.â€

Move passers-by cannot read what is advertised on the marquee-the titles mean â€œRich Boy, Poor Boyâ€ and â€œThere at Plaza Garibaldiâ€-and probably have not bought a ticket from the box office in 17 years, when English-language films last played inside. But for the areaâ€™s large Latino population, the Azteca, along with six other Spanish-language movie theaters, is a regular part of life.

The huge theaters, with heavy red or gold drapes covering the screens and auditoriums triple the size found in most modern cinema complexes, each weekend attract thousands of patrons-people able to turn a double feature into a mini-fiesta, and who seem to attend the show faithfully regardless of which movie is playing.

â€œWhen we bought the Fox, it was nothingâ€, said Jorge Bueno, who heads the company that for five years has operated the 660-seat Spanish-language theater on Van Nuys Boulevard in Van Nuys. â€œIt had been vacant for three or four months. Before that it couldnâ€™t survive with those 99-cent action and kiddie films.â€

Wonder what ever happened to Cinema 76!

Looks like whoever was doing remodeling, judging from the photo on GoogleMaps, ran out of money. “Azteca” is still there.

MagicLantern, you must have been looking at an old photo. The street view now is dated 2011, and the name is gone.

Now that I’ve seen photos of the Azteca Theatre, and the Town (Centre) Theatre has been added, with an approximate opening year of 1942, I suspect that the project that Clifford Balch designed for the Rennies in 1941 was the Town Theatre, which was referred to as Rennie’s Towne Theatre at least once in The Film Daily.

A history of the San Fernando Hardware Company Building (PDF here), which was designed by Edward J. Borgmeyer in 1925, says that Borgmeyer also designed the Rennie Theatre, which had opened earlier that year. Although the paper doesn’t cite a source for the claim, it does seem plausible. Before its remodeling, the theater definitely had the look of the mid-1920s, and Borgmeyer was a well-known theater architect by 1925.

Interestingly, Borgmeyer had designed another movie theater in San Fernando almost a decade earlier. The project was noted in the May 13, 1916, issue of Southwest Contractor & Manufacturer. So far I’ve been unable to find the name of that theater or any details about it. 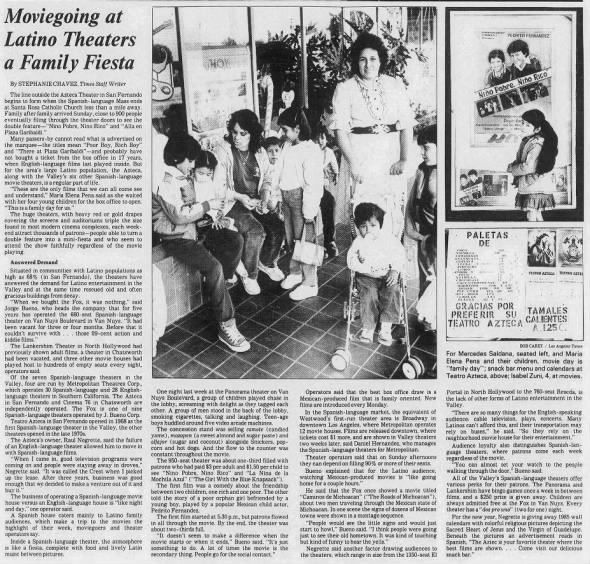 This reopened as the Crest Theatre on August 14th, 1957 with “The Delicate Delinquent” and “Man on Fire”. Grand opening ad posted