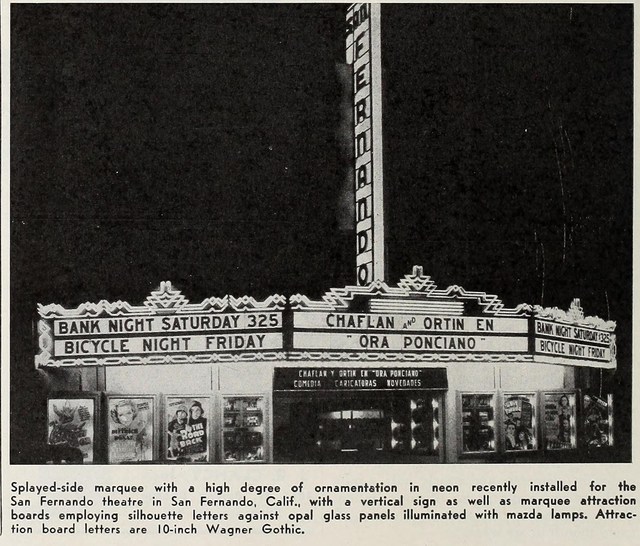 Status should be closed/demolished, following the Sylmar quake in March 1971:

The San Fernando Theater at 303 S. Brand Blvd. was so severely damaged in the quake that it has been razed. John Rennie’s Crest Theater at 214 N. Maclay Ave. also was closed due to major damage. Rennie’s Town Theater at the northeast corner of Truman St. and Maclay Ave. had been razed earlier to make way for a service station and work was under way on this project when the quake struck. San Fernando no longer has a theater.

The Cody/San Fernando Theatre was designed by architect A. Godfrey Bailey. His completion of the preliminary plans was announced in the April 2, 1924 issue of Southwest Builder & Contractor.

The photo to which Lost Memory linked above has been moved. It is now located here. It should be noted that there is a discrepancy in dates from the two sources. The caption information with the photo claims that the theatre was already open in 1923, a conclusion apparently based on the fact that the movie advertised on the marquee had been released in that year.

Architect Bailey also did a 1924 remodel of the Cameo Theatre on Broadway in downtown Los Angeles.

The Avenue Theatre asked about by Lost Memory is not on Cinema Treasures. And it’s not in the San Fernando Valley but in Cebu City, Phillipines.

Scroll through this souvenir booklet & you’ll find it:

The Cody had Wurlitzer pipe organ, opus 834, style D, II/6. The most common of all the Wurlitzer organs. The “D” and its variants were their most popular model. #834 was shipped to the Cody on May 27, 1924. This version of the “D” was a single chamber model, as opposed to the “stereo” installations where parts of the organ flanked both sides of the proscenium. Its fate unknown, but likely destroyed.