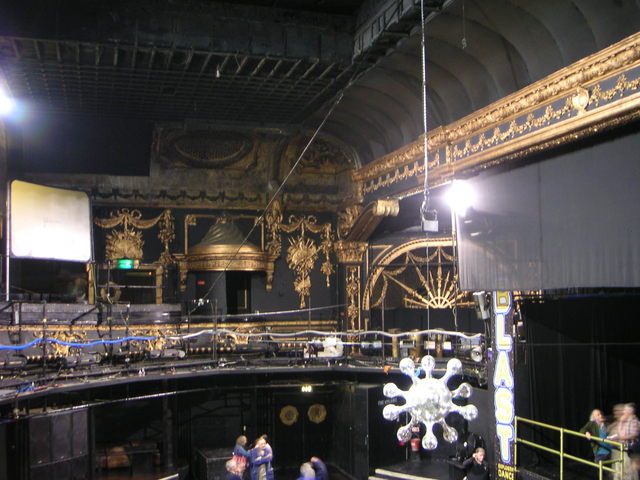 Located in the southwest London inner-city district of Brixton. The Palladium Picture Playhouse opened on 20th March 1913. The design was by architect Gilbert W. Booth who gave the building an exterior that matched perfectly the Edwardian splendour of the Brixton Town Hall that it was adjacent to. It’s interior was designed in a flamboyant Neo-Classical style mixed with a Baroque style and had swathes of plaster festoons of garlands, plaster cherubs around the auditorium which gave it the look and feel of a typical British playhouse theatre rather than that of a cinema. The auditorium was wider than it was deep and having a wide proscenium opening was an advantage in later years when wide-screen films were introduced. Seating was provided in stalls and balcony levels for a total of 1,200. Some time after its opening, it was taken over by National Electric Theatres Ltd.

In 1923 it was taken over by Suburban Super Cinemas Ltd. and in 1926 it was fitted out with the only Wurlitzer 2Manual/4Rank Model B that was brought over to England. The organ was opened by organist Melbourne Holman.

In October 1929 it was taken over by Associated British Cinemas (ABC) and became the Palladium Cinema. It was closed on 24th April 1956 for the reconstruction of the front of the cinema. Out went the decorative façade and in came a Moderne 1950’s look that was quite plain. It re-opened on 24th September 1956 as the Regal Cinema. Seating was now 1,156 with 876 in the stalls and 278 in the balcony. It was re-named ABC Brixton from 20th October 1963 and continued until 23rd October 1977 when it was leased to an Independent operator and re-named Ace Cinema. It closed on 28th March 1981.

It was converted briefly into a concert venue and roller-disco with some occasional film use but a while after closing, part of the auditorium suffered from damage with a fire.

It was repaired and re-opened on 8th June 1985 as a nightclub called The Fridge. Old refrigerator doors were hung on the façade of the building, but the interior was kept intact and painted plain black, which hid all the decorative features.

In recent years the management have seen the errors of painting the place all black and have embarked on a restoration scheme which has kept the black walls but picked out all decorative details in gold leaf. It continues as a popular nightclub, live music venue, by 2013 known as the Electric Brixton. By 2017 the auditorium was painted blue, with gold details.

Before and After photographs and historic details on the Palladium Cinema/Fridge Nightclub:
http://www.urban75.org/brixton/history/fridge.html

Melbourne Holman was my grandfather’s brother. He later became a lay brother at Buckfast Abbey, Devon where he later died. My father was telling me about him and the Wurlitzer so I looked it up on Google….and here it is! Many thanks.
Phil Holman, 13.02.2006

I did relief projection work there from my base at the ABC Streatham. A mate of mine, Phil Young, was senior second Projectionist. He went on to Elstree Studios as a projectionist and I followed sometime later, after he joined the sound-camera department. He later went out to live in Jamaica and worked in television there until he retired.

I wasn’t born in Brixton, but lived there from 6 months old (in 1944) until 1969, when I got married and moved to Luton. I remember the old Palladium well, and always bunking in the side door when an ‘A’ film was on. I was about ten and it was so obvious I wasn’t old enough to see an ‘A’ film without an adult being present. The last film I remember seeing there was when I was about ten. It was called ‘Invasion from Mars’, recently shown on digital free view. My mum took me to see it, and was bored out of her mind. I liked it though. Yes, things have changed since those days, and cinemas are certainly not what they used to be.

Some photos of the Electric taken in July 2017 here:–