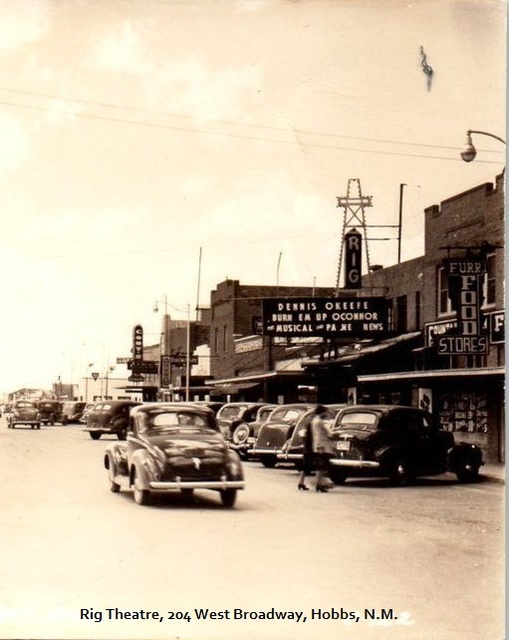 Probably the fourth movie theater to be opened in Hobbs. It opened on September 19th, 1930, as a “modern all talking playhouse” with the movie, “Manslaughter”, starring Claudette Colbert and Frederick March. The Rig was financed by L.C. Griffith and erected by Gates Corgan.

With thanks to the Hobbs Public Library.

Hey Bryan. The Hobbs library info says “ the Ritz was built on the site of the Roosevelt, which was destroyed by fire several years ago.” The info is somewhat conflicting, because it also says the Ritz was the first movie theater built in Hobbs. It doesn’t call the Roosevelt a theater so I am at a loss on this. From what I have read, I gather that the Rig and Roosevelt were not one and the same. I visited Hobbs about 11 years ago and don’t think any of these buildings have survived with the exception of the old Frontier Theater building.

According to Max Clampitt, who writes about early Hobbs history for the Hobbs News-Sun, the operators of the Rig had a Model A Ford with the doors removed that they would cruise around Old Hobbs and pick up people to give them a ride to the Rig Theater.

The Rig Theater was located in the 200 block of West Broadway, directly across the street from the Reel. Here’s a link to a picture:
View link

Great photo on the link posted by Mark. I especially like the hardware store to the left of the RIG that advertises hardware, furniture and “explosives”.

According to the 1935 Hobbs city directory, the Rig was located at 204 West Broadway.

This is the coolest theatre i’ve seen in some time. I’m not surprised it was in New Mexico. They have lots of great small town movie houses.Thanks for sharing it

Hello GrindHouse. Since you enjoyed the RIG photo so much you would really be in for a treat to visit Mark’s website.