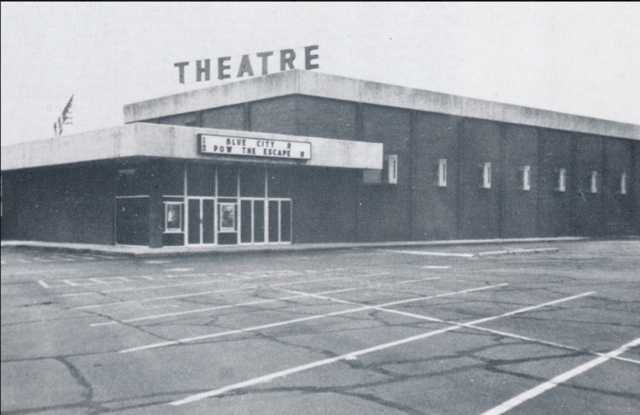 The Village Twin became the Red Clay Theatre, a live performance venue, but this closed around 2009. It is now a special events venue known as The Venue Creekside.

The Village Theatre was actually opened by Atco Corporation in 1969. Martin bought the house from Atco in 1971, according to the January 11, 1971, issue of Boxoffice Magazine. The Village was apparently Atco’s first theater. They opened the 520-seat Jackson Square Theatre in Jackson, Mississippi, in 1970, and Boxoffice in its issue of May 4 that year described that house as being similar to the Village Theatre. I can’t find anything about Atco after 1972, so the company must have either changed its name, gone out of business, or been absorbed by some larger outfit.

The Red Clay Theatre’s web site no longer has any information about the theater, and the domain name might be for sale. They probably didn’t pay their web hosting bill. The site is currently a link dump. I can’t find any events scheduled for the house anywhere else on the Internet either. It looks like the live performance venture has failed.

Also, I can’t find any mention in Boxoffice about another Village Theatre in Cleveland.

According to its entry at CinemaTour, this theater has been demolished.

AlanCo4 is correct. The Village Theatre building is still standing, and is now occupied by an event center called The Venue Creekside. It’s a nice little Midcentury Modern building of red brick, set back from the street quite a bit and facing its parking lot. The Village was of modest size- I’d guess no more than about 500 seats as a single-screener.