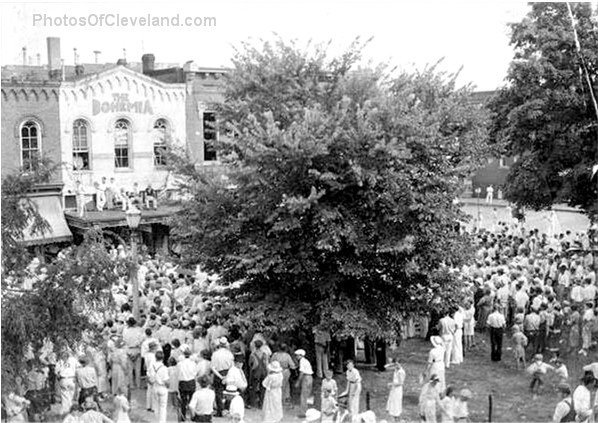 Very cool photo. Must have been a good movie showing at this theatre with a crowd that large.

Lost Memory: Could you find and post a more current photo of the Bohemia Theater?

The October 13, 1956, issue of Boxoffice Magazine ran an item about the 50th anniversary of the Bohemia Theatre. The house opened in 1906, operated by Jesse Steed. Later it was operated by Roy S. and H.E. Campbell, who installed sound in 1929. They later sold the house to the Cleveland Amusement Company, and then it was operated for a while by one of that company’s partners, Otis Renner, who in turn sold it to Crescent sometime in the 1940s. The Bohemia suffered severe damage in a fire in 1950 and had to be rebuilt. I’ve been unable to find any mentions of it after 1956.

The Bohemia Theatre’s building is currently occupied by the offices of a law firm. The building is on the east side of Ocoee Street (Lee Highway) three doors north of 1st Street.

The banner photo at the top of this web page shows the Bohemia Theatre in the distance. Scroll down through the “B” section of the page for a somewhat closer photo.

Note that although the information with the photo thumbnail gives the operating years of the Bohemia as 1911-1955, the house was clearly still in operation in 1956, per the Boxoffice article about the theater’s 50th anniversary, cited in my previous comment (scan here.)