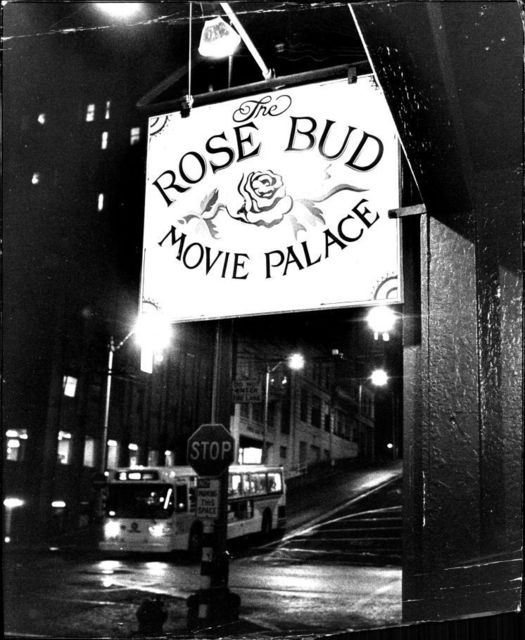 The Rosebud Movie Palace was hardly a “movie palace”, but that’s what it was called. It was constructed of plywood and two-by-fours, with no real architecture and no glitzy veneer. The Rosebud Movie Palace opened in 1974, in what had previously been a very small storefront shop in a very old building on a semi-scummy block in Seattle’s Pioneer Square.

The floor was literally plywood and the seats were mismatched, a few chairs rummaged from an older theatre that had closed, a few folding chairs, a few benches made with wood, hammer, and nails. With only 88 seats, it was often described as the smallest operating movie theatre west of the Mississippi. It’s been a long time so I’m not absolutely certain, whether the screen was the kind you set up and pull down, like in high school science class, or whether the screen was literally a bedsheet pulled taut over a wall.

The Rosebud Movie Palace showed mostly old movies from the 1930’s and 1940’s. Not the ‘standard’ old movies that play at revival houses everywhere, but esoteric stuff that’s truly hard to find. The first film I saw at the Rosebud Movie Palace, for example, was “The Maltese Falcon” – not the 1941 version with Humphrey Bogart and Peter Lorre, but the 1931 version with Ricardo Cortez and Otto Matieson. It’s better than the Bogey remake, if you ask me.

The old movies were magic, the tickets were reasonably priced, and the proprietor – a guy named Dennis Nyback, who held a day job to support the theatre as his hobby – was always willing to chat about old movies. The Rosebud Movie Palace made me a movie nut. It closed in 1981, a victim of VCRs (which made old movies much more available) and perhaps a victim of the owner’s changing mood. He went on to open bigger, better theatres around town, and eventually left Seattle. Last I heard he was running the historic Clinton Street Theatre, in Portland, Oregon.

Yes, this was a great place to see old movies before the advent of the VCR. Used to come down from Vancouver BC to see such rarities as The great Ziegfeld, Wings, A Free Soul and Cavalcade the latter of which I could cheerfully hold over my friends for years since it gave me the chance to see all the Oscar Winning Best Pictures til that time (or at least until it was finally released on VHS)It was a terrific theatre near Pioneer Square that closed in the early 80s and was still possible to park your car nearby and not have anything happen to it. Wish there were more like it.

The Rose Bud Movie Palace opened in 1974 by Chris and Tim Curtis. I took it over in 1979. Things that caused me to close it in 1981 had to do with home video, parking problems caused by the moving into the Kingdome, some personal stuff, and finally the new owners of the building asking for a big rent increase. It amused me to read that Helen Highwater prefered the Ricardo Cortez version of The Maltese Falcon. When I ran that as “the original” which was true, I got a very funny complaint letter from a guy who came to see it and was upset because it wasn’t what he considered the Original, which oddly, the Bogart version, was the third version of the book Warners produced. Finally, it was, in truth, The Rose Bud Movie Palace. It was not named after Citizen Kane.