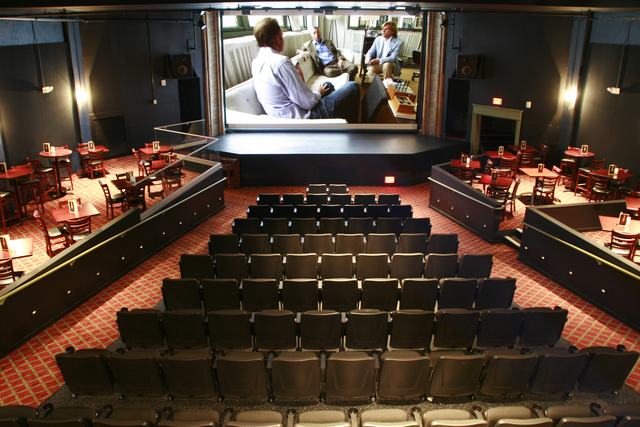 One of the very last historic movie theaters left in Bridgeport, the Bijou Theatre was opened in 1909, originally intended as an opera house, it opened as a movie theatre. In 1929, it was renamed Rivoli Theatre, and in later years became the Studio Cinema, and the Downtown Family Cinema, which closed in 1996. The seating capacity was for 604.

After laying dormant for many years, the theater was purchased by new owners in 2005, and eventually renovation work began. The Bijou Theatre re-opened July 7, 2011. It now operates as a multi-functional venue with 202 seats (94 stadium, 108 cabaret). The dominant focus will be on independent films and cultural art performances, with additional attractions of live music, comedy and theatrical productions.

The original proscenium arch has been retained, framing an intimate stage, equipped with new lighting & sound system. There is an old fashioned style concession stand, a full service bar, and coming soon, full dinner service at the cabaret tables.

The latest news (from two months ago) is that instead of renovating this into a three screen complex by adding two more screens in other parts of the building it will be kept a one screen theatre with only the original auditorium due to financial reasons.

As for the Bijou movie house, which dates to 1909, Mr. Kuchma says he has at last found a tenant for it. He was not prepared to give further details but said he was hopeful of a summer opening. (The theater already has one nonthespian tenant: its second-floor ballroom and viewing balcony house the architecture offices of Antinozzi Associates.)

Hahaha – it has been opening “this summer” for the past five summers now.

I live in L.A. but have fond memories of patronizing the Rivoli in the 1950s and 1960s. One of the last movies I saw was “Mr Moses” in 1965. If I’m not mistaken we could hear bowling during the movie as there was an alley either adjacent or above the theater.

My mother remembered the upstairs ballroom as “Quilty’s”, in the 30s and 40s. It was a great location with Howlands, Sears, Barnum Hotel, Koenig’s Art Shop and a fresh food and meat market very close.

Finally! Great news. It opened today. I was there the other day and snapped pix. New neon signage and exterior with a box office and concessions stand. The big picture window is open with a new carpet, long draped table and it looks like it’s waiting for tons of people. 3 framed poster signs out front says, “Open Summer 2011”.

I just went to the Bijou today to see some old Chaplin films. The theatre was gutted and rebuilt, but some old features such as the proscenium remain. This could be a great addition to downtown Bridgeport. My only problem was the parking is pricey. It cost me $7 to park in the garage across the street. BTW, the permanent seats are not in yet, but hopefully will arrive soon!

Good to know. I know they’ve had a steady bunch of programming there including live shows.

For over seven years these skeptics have been monopolizing these pages. Now that the Bijou Theatre has reopened, (July 7, 2011), there hasn’t been a peep from this bunch! Wonder what theater restoration project they’ll target next. Maybe there’s still some room left here for the rest of us to share some photos or other information about the original Bijou Theatre cir. 1909.

closed down according to the official web page:

The Bijou Theatre thanks the people of Bridgeport, the local theater community, and all of it’s past patrons for the privilege of serving them

They did briefly shut down in August, but reopened shortly thereafter with new management. The website is now http://www.bijoutheatre.org/.