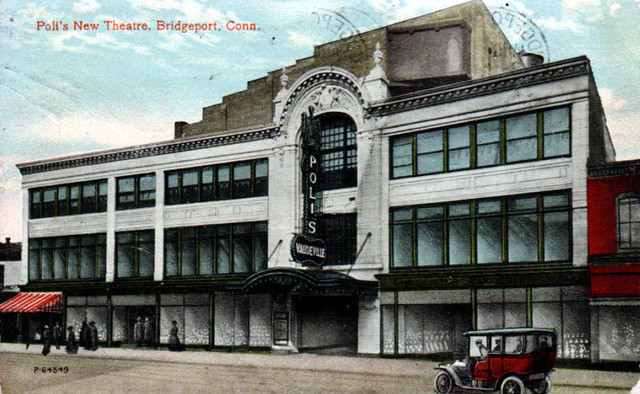 Ah, but you didn’t know the month, did you? Or that it was replaced by a parking lot? All the facts must be gathered.

I’m still researching. Give me a few days.

Sad to see folks (myself included) searching for scraps of this grand chapter in our history!

Here is a July 1951 ad from the Bridgeport Telegram:
http://tinyurl.com/22buan

A picture of this theater is on page 74 of Images of America: Bridgeport.

I worked as an usher during the fall/winter of 1954 and 1955 at the Globe. The manager was Mr. Alfred Domain. he was a tall cigar smoking man who sope with thunder in his voice. Quite a nice guy who seemed to keep things running well. On the weekends and holidays admission was 10 cents during the day and ( as I recall) 25 cents in the evening. On weekends and holidays the Globe was sometimes filled up where all balconies were open. There was usually a Bridgeport policenman upstairs and another downstairs in case things got out of hand. Sometimes fights would break out and all employees and policeman were put into play. As a generel rule problems were
resolved quickly and the show would continue.
Backstage, there was several dressing rooms where the stars from yesteryear performed during vaudeville days. In the dressing rooms you could see the makup mirror and vanity where stars would get dressed and madeup for the next act. It was said that Lucille Ball and Mickey Rooney as well as others,had worked there. That was of course long before my time. Many old posters were piled in those rooms and I sometimes wonder today as to what collector now possesses them. Fond mamories of and old and beautiful theatre. Gone but not completly forgotton. Larry Alton

The name of the architect currently credited with designing this theater is probably wrong. I can’t find an architect named James C. Van Buren (or even just James Van Buren) in an Internet search, but there are numerous references to a prominent New Haven firm called Brown & Von Beren, and there is also this brief biography of architect Ferdinand Von Beren.

Most telling is an item in the records of the New York Architectural Terra Cotta Company which lists a 1913 bid to supply terra cotta ornament for an addition to an unnamed theater on Main Street in Bridgeport, which had been designed for S.Z. Poli by the firm of Brown & Von Beren. Brown & Von Beren might have been the original architects of this theater as well as architects of the 1913 expansion. The New York Architectural Terra Cotta Company’s records only list projects on which they made bids, and they apparently didn’t bid on the original construction project.

The firm of Brown & Von Beren (see my previous comment above) is also mentioned in a 1913 issue of Motion Picture World in connection with a theater they were designing for the Poli circuit in Hartford. It was apparently never built, but it’s yet another connection to S.Z. Poli.

The biography I linked to in my previous comment atributes the design of Poli’s Bijou Theatre in New haven to Ferdinand Von Beren as well.

I’m more certain than ever that this theater should be attributed to Ferdinand Von Beren, Brown & Von Beren (the biography, published in 1918, says that partner David R. Brown died in 1911, but that the firm name remained unchanged.)

when you have a Theatre like this that seats 2600 people you really don’t need another theater in town.