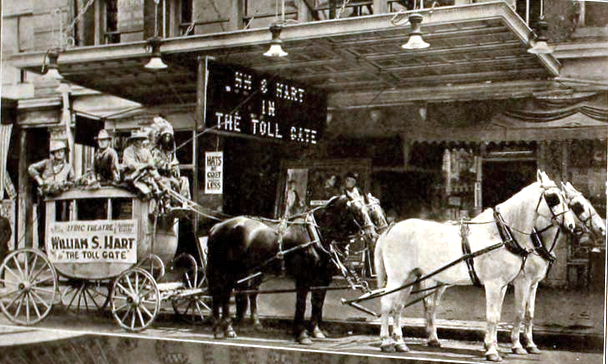 The Lyric Theatre was opened June 26, 1911. Located on Main Street in downtown Bridgeport it became Loew’s-Poli Lyric Theatre in 1918 and soon was joined by three other Loews-Poli theatres: the Majestic Theatre, the Palace Theatre, and the Globe Theatre.

As of January 1st 1930, the Lyric Theatre was operated by the Fox New England Theatres, Inc. circuit. Fox operated 14 former Poli chain theatres. When Fox left those theatres were picked up by Loew’s Theatres.

The Lyric Theatre opened on June 26, 1911 for vaudeville and stage prsentations. William Fox took over the operation of the theatre but Syvlvester Poli controlled vaudeville bookings and Fox was not able to compete. Poli took a lease on the Lyric in 1918. In 1923 Poli completed renovations of the Lyric by knocking out the back stage wall and expanding both the auditorium and stage. This was less than a year after he had opened the Palace and Majestic theatres one block away.
In 2928 Poli sold his theatres to William Fox and took them back when Fox defaulted on the terms of the sale. All of the Poli Theatres were then sold to Loew’s who operated them into the 1960’s.
My notes do not indicate it but I think that the Lyric became the home to Burlesk in Bridgeport.
The 2165 seat theatre was closed and demolished in September 1956.

BRIDGEPORT – Loew’s Lyric, usually dark except on weekends, was opened in midweek by manager Robert Carney for the one-day showing of an all-Italian program consisting of “Fedora” and “Sorprese del Matrimonio.” Business was good.

Mike Jacobson, manager of the Mayfair on the East Side, also departed from his usual film fare to run a one-night Italian show. He screened “La Mia Canzone al Vento” and “Il Corsaro Nero” to a nice boxoffice.

(from Boxoffice magazine, May 25, 1946. It should be noted that Italian films had been kept off U.S. screens during the war years, depriving the Italian-speaking population of this entertainment.)