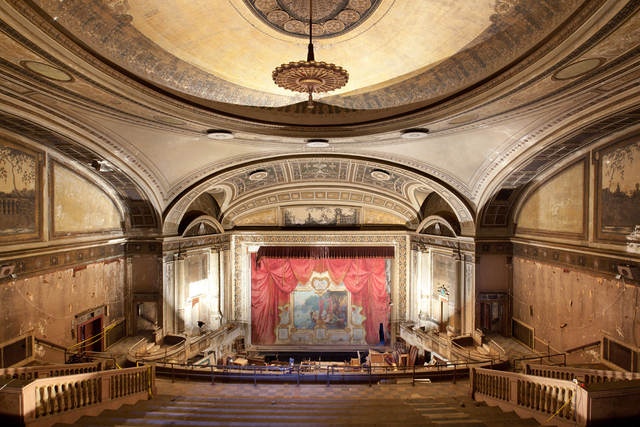 One of two theatres in the Majestic Theatre building (the other being Poli’s Palace Theatre), the Poli Majestic Theatre opened as a playhouse on November 4, 1922 with Eddie Cantor in the stage revue “Make It Snappy”. It was later taken over by Loew’s and operated as a movie theatre. In 2000 was supposedly about to undergo a slow, but hopeful restoration.

The reopening of the Majestic Theatre as a performing arts center, along with the adjoining Palace Theatre, is part of an effort to revitalize the downtown of one of the nation’s most beleaguered cities. The $40 million dollar renovation would bring the 1920’s era vaudeville and movie houses back to life, and establish them as cultural and performing arts centers for the region.

For now, the theatres sit and await their curtain calls. The marquees for both theatres have decayed to the point where wooden blocks were constructed to hold them up. The Majestic Theatre and Palace Theatre are similar in exterior appearance to the 3,500-seat Waterbury Palace Theatre, also designed by Thomas Lamb for the Poli chain which later became part of Loew’s.

I have contacted the city; and they have contacted me about both the Loew’s Majestic and Palice Theatres. I have done theatre restorations in the past; and I also promote & produce big name and top tribute artist entertainers on concert tours.

I am interested in heading up efforts to restore and reopen these two grand theatres, for both live entertainment and film, but need to know that there is enough interest from local residents, to help make that happen. If you are interested, please contact me. Don Thanks.

On Monday July 27, 2015, I entered what I’m told will be lengthily talks with the City of Bridgeport to either lease or purchase the Palace, Majestic and Savoy Hotel for restoration and operation. I’ve done this before; and I’m a concert promoter/producer of bot big name entertainers and world’s best tribute artists. I will be in Bridgeport mid-October to tour the facilities and would like to meet anyone interested in helping (some paid and some volunteers) restore these grand pieces of Bridgeport history. If interested, please contact me at I live in Far Northern CA; but would move to Bridgeport, if the city and I can come to an agreement. There will also be need of people to help with fundraisers (some will be concerts), festivals and seeking grants. We also will be asking local businesses to donate a substantial amount of the supplies. If enough people reply, I will schedule a meeting someplace, for everyone to attend, while I’m there in October. Again (Don)

The original plan, is to get the wiring and “must be done prior to occupancy” things done, so some concerts can be held in one of the theatres (hopefully the Palace; as it seats 1242 more people). That will give us 1) a non-used theatre to work on 2) allow people to see how much work needs to be done; and why $’s, donated items and volunteer help is desperately needed. We also will work to get the storefronts useable, so that we can open 1) a shelf-pull, damaged and closeout store in one or two of the storefronts. 2) a store that sells donated items. Having these two store types open will help raise funds towards the project. They also will draw attention to the fact we are restoring the theatres and hotel. This will help get items donated, additional volunteers and cash donations. Documenting everything and making still pictures, DVD’s and CD’s to sell as fundraisers also will be done. Right now, I need a list of people that are interested in helping; from getting the city to approve letting us do the project, to fundraising, grant-writing, volunteer work in restoration. Thank You! Don Kirk

I just put a facebook page online to cover our efforts to acquire, restore and reopen the Majestic, Palace Theatres and the Savoy Hotel. While each will maintain their name, if we get them, the entire complex will be named The P.T. Barnum Event Center.

there is an excellent urban exploration video of this building and walk-through of both auditoriums. it was posted last month.there is no mention of the location in the video however i recognized it from the various pictures that i have seen and i’m sure that there are very few large double auditorium theaters in the u.s. it is worth checking out. that place still seems to be in very nice shape!!

I was driving by this week and I noticed a sign that said coming soon: Majestic Performing Arts Center. I don’t get downtown much these days, so I’m not sure how long the sign has been there, but I’ve definitely never noticed it before. It also looks like a new marquee is under construction. I didn’t see anything on the Palace side of the building.

It looks like renovation will finally happen for the Palace!

According to this article, the Exact Capital Group plans to renovate both the Palace and Majestic Theatres and the Savoy Hotel (to be expanded), as well as build two residential towers across the street and another residential tower nearby.

The Palace would be renovated into a banquet ballroom and a family-friendly indoor recreation center, and the Majestic into a performing arts center. They plan to begin work win about 12 months (late 2018).

From the Connecticut Post: BRIDGEPORT — Even as City Hall has launched a search for developers for properties along Main and Congress streets, ground has yet to be broken on the renovation of a pair of historic theaters nearby — a project offered up as a selling point to prospective downtown investors.

The city wants a mix of retail and market-rate housing on the parking lot, but has placed fewer restrictions on ideas for the Davidson’s building. Ideally that historic structure would be restored with “proposals that will draw patrons, dollars and activity into downtown (and) encourage overnight hotel stays” while also serving current and future downtown residents, according to the RFP.

Both RFPs promote a $400 million plan by New York-based Exact Capital, approved last September by the City Council, to restore the Poli Palace and Majestic theaters and Savoy Hotel to the north of Davidson’s Fabric and the cops’ parking lot. Residential towers — one 18 stories high — were also part of Exact’s winning pitch, selected from three responses.

Late last November, Craig Livingston, managing partner at Exact, had said the developer planned to break ground in “the back half” of 2018.

But as of this week, Exact, according to the city, is still piecing together the $50 million in financing needed for Phase 1 — rehabilitating the theaters and Savoy into a hotel with retail and performance/assembly space.

”We talk on a bi-weekly basis as to Exact’s progress on financing and tenancy on Phase 1,” wrote William Coleman, deputy director of planning and economic development, in an email to Hearst Connecticut Media.

Exact’s vision was frequently touted by Mayor Joe Ganim during his unsuccessful bid to win August’s Democratic gubernatorial primary. At one point, the mayor called the proposal “the most exciting urban development project anywhere in this state.”

Under the terms of the city’s deal with Exact, the developer had a year to assemble financing for Phase 1. Coleman said that the time period ends with the 2018 calendar year, not with September’s anniversary of the council’s approval.

Livingston, when reached by phone this week by Hearst, said he was on a conference call and asked that the reporter call back. He did not respond to subsequent requests for comment.

Coleman said Exact, beside working on financing and pursuing tenants, has also done market analysis and environmental assessment of the old buildings.

Coleman also noted that, regardless of what happens with the theaters, there is interest in the Davidson’s Fabrics and police parking sites nearby and “we believe they can go forward.”

Though there has been no visible progress on Exact’s Bridgeport project, the company and its partners have, according to coverage by some Realty websites, broken ground on a similar redevelopment of Harlem’s Victoria Theater — Exact’s first experience with old historic performance spaces.

Michael Jordan, president of Jordan Electric, in mid-April attended a job fair the city and Exact held to promote the planned work on Bridgeport’s theaters and the potential opportunities for local and minority contractors. Unlike some other development deals, Ganim and the City Council did not insist Exact employ union labor — a move proponents said could provide more work for residents and minorities.

Jordan said he has not been contacted since the fair about any work but was still hopeful: “These wheels roll slow. Things move slow.”

”Will I be around for it is the big question,” added Jordan, 63. “I got a couple more years and probably going to hand it (his business) over to someone else.”