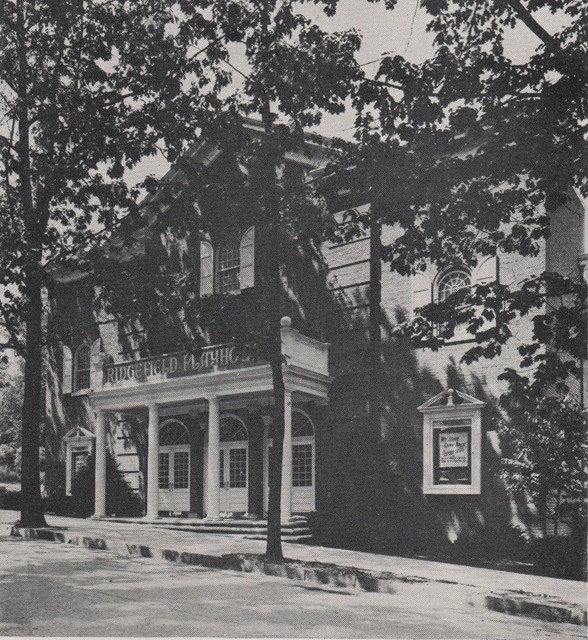 Ridgefield had two movie theaters – the Playhouse, and the Cinema. I think they were open simultaneously for a very short time, since the Playhouse closed in, and the Copps Hill Plaza, where the Cinema was located, opened in 1972.

1938 - Plans are announced in April to build “a beautiful, modern air-conditioned motion picture theater” on land to be acquired for $7,500 from the Ridgefield Library. It was the only Colonial Revival style theatre to be designed by architect John Eberson. Seating was provided for around 500 in the orchestra and just over 100 in the balcony.

1940 - Ridgefield Playhouse opens March 26 on Prospect Street and shows first movie, “Broadway Melody of 1940”, starring Fred Astaire and Eleanor Powell, plus the Disney cartoon, “The Ugly Duckling”. It was built for and operated by Casey & Wheeler, who operated more than 30 theatres.

1974 - The Village Bank and Trust Company, the town’s only locally owned commercial bank, opens in the former Ridgefield Playhouse building on Prospect Street.

2009 - The library plans to demolished the building, which is on the State Register of Historic Places.

(All of the above information from “Ridgefield (CT) Time Line 1900s” at http://jackfsanders.tripod.com/timeline1900.htm)

Note: There is now a “new” Ridgefield Playhouse, that is again a single screen movie/concert venue. It is in fact the auditorium of the old Ridgefield High School, which has not been a school since the early-1970’s and was rented for a while as corporate headquarters by Boehringer Ingelheim Pharmaceuticals.

Anyone ever see a movie in the original Playhouse and recall what the interior was like?

p.s. Note an error in both the “About the old playhouse” at the bottom of the July 27, 2009 post above and in the initial timeline that I posted: the timeline says it closed in 1970 and the later post says it was remodeled as a bank in 1970. I know this is not possible, as I attended a movie at the Playhouse and could not possibly have done so prior to 1971 (in fact, I thought it was 1972). Also, the posts by the former manager and the brother of the former usher above both state they worked there until 1971.

An editorial today in the News-Times about the saved demolition.

Two playhouses in Ridgefield are hanging on and in jeopardy of disappearing. We certainly hope they both make it, and we urge people who support the arts on a personal and corporate level to step forward and make sure it happens.

The old Ridgefield Playhouse, across Prospect Street from Ridgefield Library, has been saved from the bulldozer, if only for now. The library, which owns the playhouse, is looking for more usable space and applied for a demolition permit to knock down the building.

Library expansion and preserving a historic landmark are both worthwhile projects. And Ridgefield First Selectman Rudy Marconi has convened a task force to see whether both can be done.

We hope they come up with a solution, and that it brings new programming — plays, film, music and fine art — to the old theater. Rather than just preserving, for its quaint appearance, a 1940 building that’s on the state Register of Historic Places, make the place breathe again.

The other Ridgefield Playhouse, which opened in 2000 in a restored theater at 80 East Ridge, has seen audiences dwindle over the last year.

Ridgefield doesn’t book the big names that play Connecticut venues such as the XL Center, Mohegan Sun Arena and Comcast Theatre (once called the Meadows). But offbeat booking should be considered the playhouse’s strength, not a weakness.

The Ridgefield Playhouse has a lineup of coming attractions that includes alternative folksinger/songwriter Ani DiFranco,
Advertisement
pop/jazz trumpeter and music mogul Herb Alpert, bluesman Keb' Mo' — along with theater and film programming that includes a series of live conversations with directors.

You don’t find that kind of variety in many places.

Event sponsorship matters in determining the nonprofit Ridgefield Playhouse’s fate. So do ticket sales. If the box office steers the playhouse to tweak its booking choices toward popular tastes, that fine.

We hope the Ridgefield playhouses ride out this rough patch. Art and culture are important — in good times and bad. And there should always be a place for an independent, nonprofit venue.

That’s a wonderful editorial, though I question the idea that even if the old Playhouse building is preserved, it can be used for “new programming — plays, film, music and fine art.” Well, fine art, maybe… but the actual theater auditorium was long ago turned into bank offices.

New developments on the old Ridgefield Playhouse, which could be resurrected under a new name: http://www.acorn-online.com/joomla15/theridgefieldpress/news/localnews/119646-three-screen-theater-will-be-hearing-tuesday.html

From the Danbury News-Times:

Library, theater plans move ahead Posted: 06/20/2012 2:20 PM RIDGEFIELD — Work on two interlocking projects — the $20 million Ridgefield Library and the Prospector Theatre — are poised to begin work within the next six weeks.

When the work is completed in late 2013, it will change the downtown landscape.

“It’s a radically important nexus for the town,‘’ said Planning and Zoning Commission member Michael Autuori of the two buildings.

The commission gave unanimous approval to the two projects Tuesday. It still must give final approval to the draft decision, but that’s expected to follow without issue.

“I’ve only seen the commission change its mind on draft decisions a couple of times,‘’ said attorney Robert Jewell, representing the library at Tuesday’s meeting. "This isn’t going to be one of those times.‘’

The move now allows the two projects to move forward.

“We have the financing,‘’ said Valerie Jensen, the leader of the move to demolish the old Ridgefield Playhouse on Prospect Street and rebuild it as the Prospector, a three-screen cinema and arts center.

Plans are now fast as this will be demolished. The facade will be saved and it will be rebuilt as the Prospector Theatre; a 3-screen cinema and arts center. http://www.newstimes.com/news/article/Library-theater-plans-move-ahead-3649373.php

The facade will apparently not be “saved” — it will be “recreated” using “as much of the old building’s bricks as possible”… Anyway, demolition is now underway, and I’m posting some pics I snapped today with my lousy cell phone camera in the photo section. (The fact that they spray-painted “DEMO” all over the bricks on the facade makes me wonder how they’re planning to reuse them; but hey, it makes as much sense as an article about the theater’s demolition being headlined “Theater revival under way”… or the point I made before that this will give Ridgefield TWO non-profit theaters to support, including the one that took this theater’s name.)

Theater revival under way Robert Miller Updated 10:42 p.m., Friday, September 14, 2012 NewsTimes.com Read more: http://www.newstimes.com/local/article/Theater-revival-under-way-3866524.php#ixzz29mYE3Fp0 RIDGEFIELD — Valerie Jensen — dressed for the occasion in black gown, pink carpenter’s tool belt and black Converse All-Star sneakers with shocking pink laces — popped a confetti-filled champagne bottle in front of the old Ridgefield Playhouse. The theater’s rebirth as The Prospector was about to begin. “All right,‘’ she said Friday. "Let’s go to the movies.‘’ Jensen was officiating the start of the demolition of the town’s 1939 movie house, turned bank, turned vacant building. In 18 months, she hopes, it will reopen as a three-screen theater showing a range of films — current releases, independent films, classics. Her love of the theater, she admitted, began in 2009, when the Ridgfield Library — which owned the old theater — realized the building could not be used as part of its expansion. The library proposed to tear the theater down. "I had passed this building a million times and never thought about it,‘’ Jensen said. "I went inside. I looked at the theater and the theater looked at me. It was love at first sight.‘’ Jensen is the head of SPHERE — Special People Housing Education Recreation and Employment — which works with people with disabilities. While she’s made two movies for SPHERE, she admits she has no experience running a theater. But she was able to get the financing to buy the theater from the library for $2.55 million. She will now tear the building down. The new building will duplicate the old theater’s facade lobby, using as much of the old building’s bricks as possible. The project will then add on the three new cinemas — one with 150 seats, a second with 120, and a third with 150 seats that can be used for parties and special events. First Selectman Rudy Marconi told the crowd gathered at the ground-breaking of seeing the Alfred Hitchcock classic "Psycho'‘ as an 11-year-old, then running home, scared to death by the menace of a demented Tony Perkins. Oblivious to the world, he ran into a telephone pole, and ripped his new jacket. Which then gave him something else to be scared of. "My mother was so mad at me,’‘ he said. ; 203-731-3345

This theater is now known as The Prospector, after having been demolished and rebuilt to look (front facade, at least) like the original Ridgefield Playhouse. All future information about the new version will be posted under The Prospector.