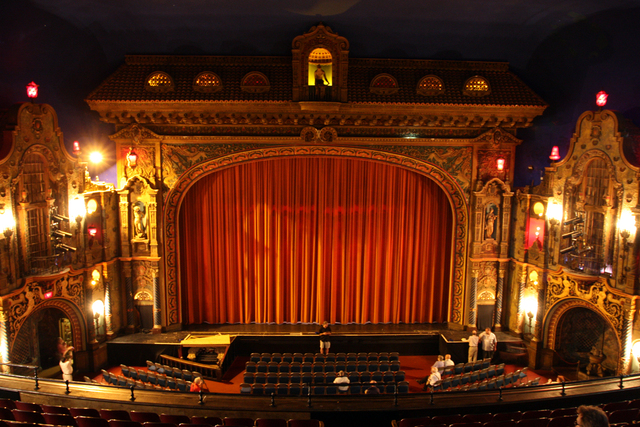 This Atmospheric style movie palace is now the home of performing arts and live concerts. The State Theatre was opened by the Butterfield Theatres chain on July 14, 1927. It is equipped with a Barton 3 manual 14 ranks organ.

It was renovated in 1964, and some of the interior decorations were removed. Butterfield Theatres closed the State Theatre in 1982. Taken over by the Hinman Company in 1985, the interior was restored to its original condition.

On December 3, 2021 it was added to the list of the National Register of Historic Places.

Hey. Since some of you seem pretty interested… Actually, a lot of the cool stuff they moved/took down when they’ve “cleaned up” or changed things in the theatre is still there. It’s either been put back up, or put somewhere else safe where it can still be seen, but not harmed. We have some in the box office in the entryway and in the office next door to the main entrance. And the fountain, cool spanish light fixtures are still working & there, and even the moving clouds & stars ceiling still works. Itâ€™s funny â€" the switches & everything you have to use to turn on the lights & all of that are so old. I feel like Iâ€™ve warped back in time every time I use them. Granted, there are some things that won’t be coming back… The doors got changed in the 60’s to an all-glass front & there used to be a big gorgeous fountain in the entry way, and where the bars are now used to be posh little seating areas with chairs/couches and terra cotta (sp?) pottery with big lush plants all around & whatnot. Sometimes I wish I were absolutely loaded so I could make that place look as lavish as it once did. Would be so cool.

The original marquee actually was so massive and heavy that the way it was put up on the corner of the building corroded things over the years and it eventually went crashing down, so the marquee you all see now was put there in its replacement. Some things have fallen down over the years, yes, such as little statues & whatnot. There are some things that fell or broke over time, but weâ€™ve still got a lot of it. Tons of old posters, too, but we wish we could find some from its early days. This yearâ€™s the 80th anniversary!

There are pictures up on the website (www.kazoostate.com). If you guys were that interested, Iâ€™ve got a ton of pictures of old cool stuff we found cleaning out random little hidden storage rooms under the seating areas & whatnot. I could get them up somehow.

For those of you that are myspacers, check out www.myspace.com/kazoostate

Sarahbauman… sorry to move us off topic for a post… would you be so kind as to contact me regarding your theater. I’m working on an article about Ebersons Atmospheric designs and would enjoy being able to ask a few questions. Thank you.

I remember going to see the Butthole Surfers there in the 90s and people destroyed one of the statues down towards the stage. I look back at that and become really angry at the needless destruction of one of Kalamazoo’s most historic buildings under such stupid circumstances.

Haha – of course you get a picture of our marquee the day the wind knocked the letter N off… “REO TICKETS ON SALE OW” It wasn’t even like that for very long. Sneaky, sneaky. You probably noticed the bit of white paneling behind the letters that’s caved in a bit. That’s getting fixed, thankfully.

Frank Caliendo is the guy that does the John Madden impressions on the football pregame show.

Colonel Butterfield’s first name was Walter, not William which somehow has taken on a life of its own.